Find Your Favorite Composer, Painter, or Author on Mercury 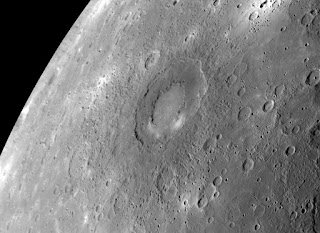 The MESSENGER mission (orbiting the little planet Mercury) is taking remarkable close-up images.  One of the most intriguing features seen in these pictures was recently named after one of my favorite composers -- Sergei Rachmaninoff.  Double-ringed crater Rachmaninoff, seen on the image I have attached, is about 180 miles across and seems relatively young.  Note how the central circle is smoother (has fewer smaller impact craters in it), which indicates to the mission scientists that volcanic flows from inside the planet may have covered that inside region after the original double crater formed.

For target, select Mercury, for Feature Type, select "crater, craters." Then just type in your favorite composer, author, or painter into the Feature Name field. (Remember the people have to have been dead for a while, so don't look for living favorites, only for people whose reputations have become established after their deaths.)

For more on the results from the ongoing Messenger mission, see:
http://messenger.jhuapl.edu/
Posted by Andrew Fraknoi at 6:43 PM