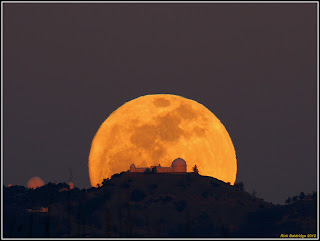 "Super-moon" This Weekend (Sort of)This weekend, two characteristics of the Moon will conspire to make it look a little brighter and a little bigger than usual. It might just give you an extra reason to take a night stroll with someone with whom you like to spend time in the dark. At about the same time, the Moon with be full and closest to the Earth in its slightly oval orbit. This means the full Moon Saturday night will be somewhat more spectacular than in a typical month. It has no bad effects on us, but it will be nice to look at. (The media are calling it a super-moon, which is a bit of an exaggeration, but it's worth glancing up at, if your evening is clear.)

Even the very responsible story from NASA is a bit strong, but it's probably the best reference to learn more:
http://science.nasa.gov/science-news/science-at-nasa/2012/02may_supermoon/

If you worry that the full Moon is connected with "lunacy" and crazy behavior, and this close moon will only make things worse, fear not! Many experiments have now shown that there is NO connection between strange behavior, crimes, or births and the full moon. If you want to learn more, you can check out my resource guide to astronomical "pseudo-science" at:
http://www.astrosociety.org/education/resources/pseudobib.html

Hope your Saturday night is a heavenly one!
Posted by Andrew Fraknoi at 12:12 AM