Seven Minutes of Terror: Curiosity Rover to Land on Mars 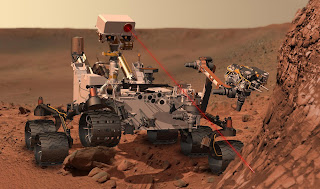 If all goes well, and keep all your fingers crossed that it does, the most complex laboratory ever sent to another world will land on Mars next Sunday night. The Curiosity Mars Rover is slated for Ma
rs touchdown Sunday, August 5, at 10:31 PM Pacific time, in a never-before-tried rocket-powered sky-crane landing. To see, what's involved and why NASA's Mars scientists all have their nails bitten down to the fingertips, check out the video about the "Seven Minutes of Terror" after the craft reaches the top of Mars; thin atmosphere: 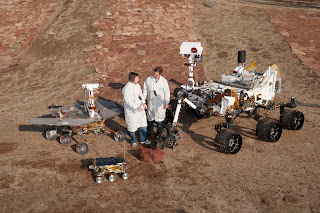 Here is a great image from the Jet Propulsion Laboratory, which builds and manages so many of our robot probes to the planets. This show the three generations of Mars rovers, the little Sojourner at the front left, S
pirit/Opportunity to the left of the two technicians, and then big Curiosity (the one that we hope to land on Sunday) on the right. NASA says if Spirit and Opportunity were golf carts, then Curiosity is a car. It has 10 science instruments, weighs almost one ton, and requires too much power to use solar cells (as the previous generations of rovers did). It has a generator powered by radioactive plutonium dioxide on board.

Among its tools is a microscope that can see things as small as the width of a human hair! And the microscope tool carries a small light so it can do night work. Its laser can vaporize rocks up to 23 feet away, and "smell" what they are made of from the vapor. Since (at the time of the landing) messages from Earth will take 14 minutes to get to Mars, the rover has artificial intelligence software for making any immediate decisions that are required. The question is, is Curiosity smarter than your little brother?
Posted by Andrew Fraknoi at 10:33 AM