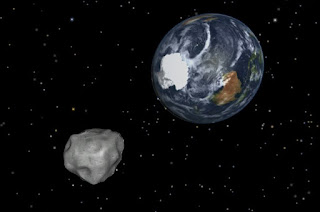 This Friday (2/15) a small asteroid will fly by the Earth at quite close a distance -- only about 17,000 miles above our planet's surface.   That's closer than some of the satellites that orbit the Earth. Closest passage will be around 11:30 am Pacific time on Friday, but it would not be visible without a telescope even if it were passing during night time.

There is nothing to fear from this flyby -- the asteroid is going to miss the Earth and shoot by us at eight times the velocity of a high-speed rifle bullet.  But it does remind us that we live in what some astronomers call "a cosmic shooting gallery," where chunks of rock and ice left over from the early days of our solar system still fly around and occasionally hit a planet or a moon. (You can see billions of years of such hits if you point a pair of binoculars at the Moon. Having no atmosphere, oceans, vegetation, or teenage children to erode its surface, our Moon preserves every impact as a round crater on its surface.)

This particular asteroid, discovered by a Spanish observatory last February, is given the catalog name of 2012 DA14.  We are not sure of its exact size, although we will learn much more about it as it swings by.  We estimate that it's about 90 to 150 feet in diameter, although it is probably not round, but shaped like a fresh potato (as shown in the JPL artist's conception that accompanies this article.)  If something this size were to hit the Earth at typical near-Earth asteroid speeds, it could take out an entire city, much like a nuclear bomb.  It could wreak devastation even if it never reached the surface, but exploded from the heat of friction in the atmosphere.

You can understand why astronomers are working hard to catalog every significant-sized chunk of rock that crosses our planet's orbit.  Of course, the smaller the object, the harder it is to see when it's far away. But this way, if one of these larger cosmic "bullets" does have our name on it, we can know about far in advance and prepare.  With enough notice, we might even have the technology to nudge it aside and help it to miss our planet.  This would be the kind of project that would make astronomers and NASA popular for a while!

Posted by Andrew Fraknoi at 2:39 PM