A Triple System of Star Corpses 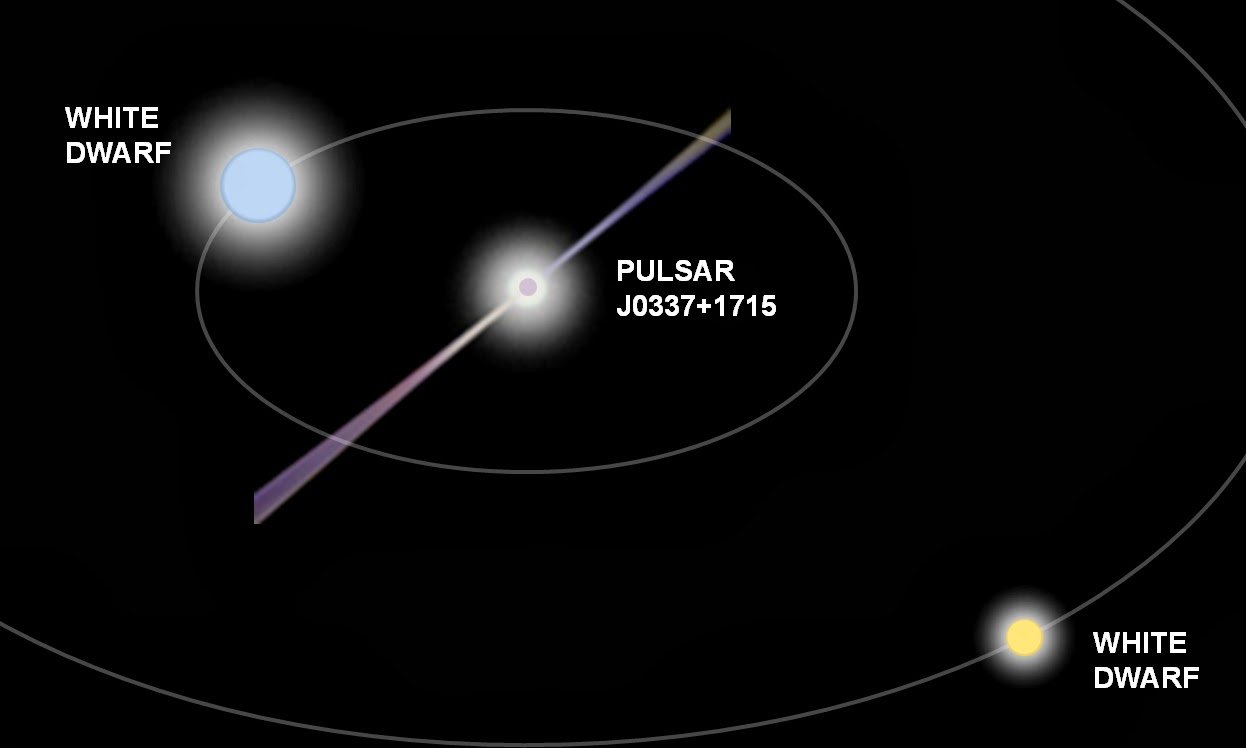 An international team of astronomers has just reported the discovery of one of the weirdest star systems we have ever seen -- a triple system of star corpses (dead stars) whirling around each other in a space smaller than the Earth's orbit around the Sun.

The system of stars is more than 4,000 light years away, in the constellation of Taurus. (But this story is no bull!) The system doesn't have a name, only a catalog number.  It consists of one "neutron star" (which pulses with radio waves) and two "white dwarfs."  Generally, a tiny "neutron star" only forms after a massive star dies by blowing itself to pieces, leaving a very compressed remnant (or "corpse") behind.  So, those three stars, which show evidence of having formed together, had to remain together even when the biggest star of the three exploded.  Later, the two smaller stars died and also became compressed objects (not much bigger than a planet) called "white dwarfs."  (They get that name because they are small and white hot.)

Now the three corpses continue to spiral around each other, in a strange cosmic ballet .  The heaviest corpse, the "neutron star" is really dense -- it is so compressed that to make something like it on Earth, we would have to take all the people in the world and squeeze them into a raindrop!  (Then we would have one rain-drop sized piece of the neutron star.)

Sometimes we see such "neutron stars" giving off spinning magnetic beams of radio waves.  Whenever such a radio beam sweeps over the Earth, we get a pulse of radio waves.  In such cases, we also call these dead stars "pulsars."   Their beams of energy can be timed with great accuracy.

In 1974, my former college advisor, Joseph Taylor (and Russell Hulse,) discovered the first pulsar in a double star system.  Measuring its pulses enabled them to verify important predictions of Einstein's General Theory of Relativity, and earned them the 1993 Nobel Prize in Physics.  At the time, astronomers thought that finding a neutron star/pulsar with a companion was pretty surprising (although today other double systems are known.)

Now suddenly, we have a neutron star/pulsar with TWO companions.  How completely and wonderfully weird!  And this particular neutron star spins hundreds of times per second. Its fast spin and two companions will allow astronomers to measure the predictions of Einstein's theories even more precisely than we have been able to do in the past.
Posted by Andrew Fraknoi at 11:57 PM