Apr. 14-15, 2014 Total Eclipse of the Moon Visible Throughout North America 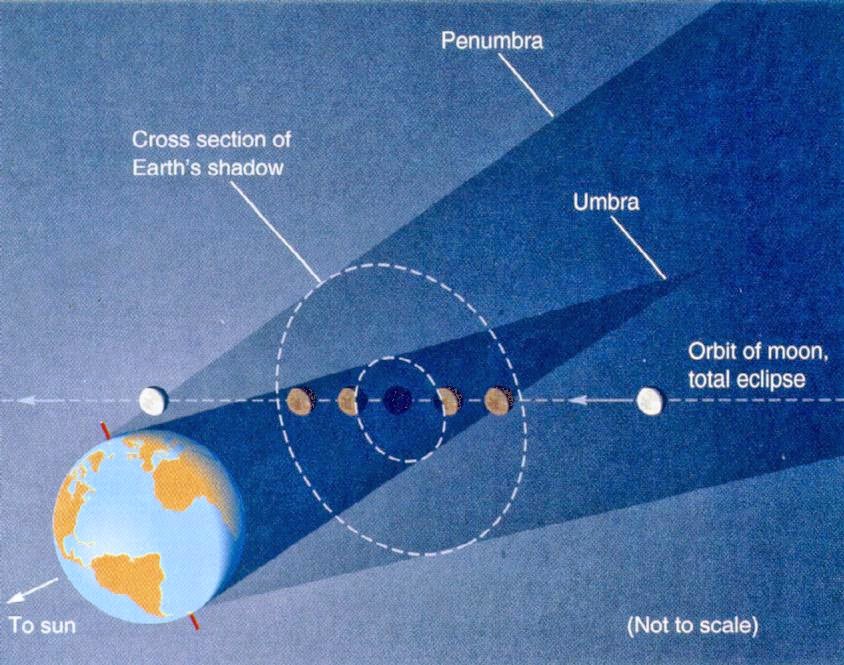 I've put the information about this eclipse in question-and-answer format:

Late on Monday evening and early Tuesday morning, Apr. 14-15, a total eclipse of the Moon will be visible from throughout the U.S.  In a lunar eclipse, the full Moon and the Sun are exactly opposite each other in our skies, and the Earth gets between them. This means that the Earth’s shadow falls on the Moon, darkening it.  (See the diagram above.) This will be a nicely democratic event; the eclipsed Moon will be high in the sky and easily visible (provided it’s not cloudy.)

2. When Will the Eclipse Happen?

As the shadow of the Earth slowly moves across the Moon, we first see only part of the Moon darkening (partial eclipse).  When the Earth’s shadow completely covers the Moon, we see a total eclipse, weather permitting.

The best times to watch probably start a half hour before total eclipse starts, by which time a substantial part of the Moon is eclipsed.  The whole total phase lasts 78 minutes this time, and it looks pretty much the same the whole time, so only the most dedicate eclipse buffs will stay up for the whole thing.

3. What is Visible During a Lunar Eclipse

As the shadow of the Earth covers the Moon, note that our natural satellite doesn’t become completely dark.  Light bent through the Earth’s atmosphere still reaches the shadowed Moon, and gives it a dull brown or reddish glow.  The exact color of the glow and its darkness depend on the “sooty-ness” of our atmosphere – how recently volcanoes have gone off and how much cloud cover, storm activity, and human pollution there is around the globe.

Also, as the Moon becomes dark, other things in the night sky become easier to see.  As you look toward the southwest, you can see Mars to the right of the Moon, the bright star Spica just below and near it, and Saturn off to the left. Here is a nice diagram from Astronomy magazine (click to make it bigger). 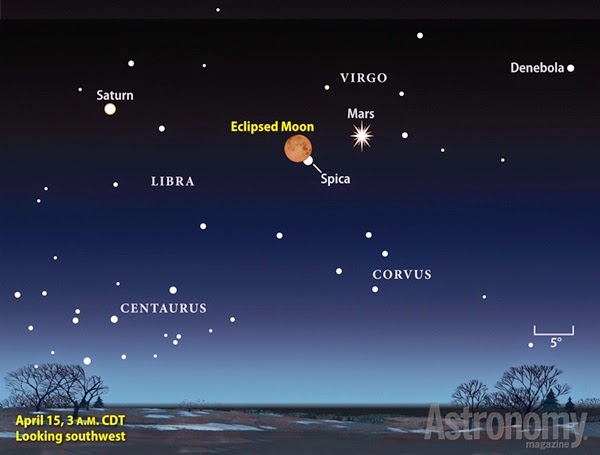 (Note that this is drawn for 3 am Central Time, which is 1 am Pacific Time.)

Since the Moon is safe to look at and eclipses make the Moon darker, there’s no danger in watching the eclipse with your eyes or a telescope.  (The more dangerous eclipse is the solar one, where it is the Sun that gets covered.) Lunar eclipses don’t require you to have fancy equipment or to go to a dark location.  Bring binoculars, if you have them, to see the Moon larger, but just your eyes are fine.  Take someone along with whom you like to spend time in the dark!

5. What Can I Tell My Kids (or Kid Brother or Sister)?

Suggest that they take a careful look at the shadow of the Earth as it moves across the bright face of the Moon.  What shape is it?  The round shape of the Earth's shadow suggested to the ancient Greeks, more than 2000 years ago, that the Earth’s shape must be round too.  Eclipse after eclipse, they saw that the Earth cast a round shadow, and deduced that we lived on a round planet (long before we had pictures from space.)


Also, if kids have to miss this eclipse, you can console them by letting them know that there will be another total lunar eclipse on Oct. 8th, 2014 (and two more in 2015.)
Posted by Andrew Fraknoi at 1:12 PM