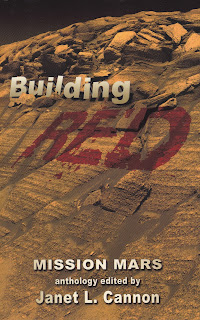 As some of you know, I have long enjoyed science fiction, both as fascinating reading and also as a nice addition to my introductory astronomy classes. For 30 years, I also kept a diary of science fiction ideas that occurred to me, and might make the basis of good stories.
In the last year or two, I have joined a writing group and am trying to create some SF short stories of my own. I have a full bulletin board of eloquent rejection slips from some of the finest science fiction magazines in print (as, I gather, all beginning writers must collect,) But now, one of my stories has been published, in a Mars-theme anthology called "Building Red," from a small independent press in St. Louis called Walrus Publishing (and the book is available on Amazon: http://www.amazon.com/Mission-Mars-Building-Ja…/…/1940442079 )
The story, based on a real discovery about Mars, takes place in part inside a cave on the flanks of one of the four giant volcanoes on Mars' equatorial bulge. Instead of the sanitized, squeaky-clean NASA version of a future Mars colony, I tried to imagine one that's crowded, smelly, and has its share of loners and misfits.
The story is entitled "The Cave in Arsia Mons" and it appears together with Mars stories by a number of writers, some of whom have a longer publishing record in SF than I do.

More generally, for a topical index to science fiction stories that have good astronomy in them, see my web page at:
http://www.astrosociety.org/scifi

Posted by Andrew Fraknoi at 7:21 PM