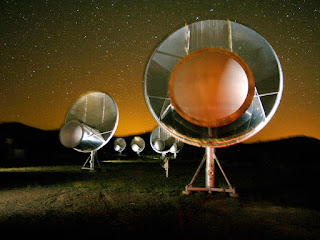 Some of my regular readers know that for years, I have had the privilege of serving on the Board of Trustees of the SETI Institute, a non-profit organization devoted to the search for life in the solar system and in the universe at large.
As a non-profit organization, the Institute depends on scientific research grants and on donations from members of the public who value its work. This coming week, the Institute is participating in the 2016 Silicon Valley Gives campaign and looking for 500 new donors and friends who want to help underwrite its work -- and be part of the quest to find life elsewhere. We Trustees have provided a $17,000 matching grant – to double any contribution you care to make.
You can be part of the campaign at:https://svgives.razoo.com/us/story/Seti-Institute-2
What kind of projects does the Institute do? You may have heard of the Allen Telescope Array (see the image), a connected group of radio dishes that scans the skies, hoping to eavesdrop on radio signals from an alien civilizations. But Institute’s 80 scientists are also involved with the search for planets orbiting other stars using the Kepler space telescope; with the search for water in the solar system, including on Mars and Jupiter’s moon Europa; with the exploration of Pluto (the Institute’s Mark Showalter discovered two of Pluto’s moons) and other worlds; and much more.
In addition, the Institute’s weekly syndicated show “Big Picture Science” brings humorous, accessible news about scientific ideas and discoveries on radio stations around the country and around the Internet. The Institute has frequent outreach activities in Silicon Valley and beyond. (You can see me explain black holes in six minutes at one of these at:https://www.youtube.com/watch?v=7DX_cc-IjpY )
So won’t you join me in becoming part of the team that works to answer the ancient and beguiling question, “Are we alone in the universe?”
Donations of any size are gratefully accepted at:https://svgives.razoo.com/us/story/Seti-Institute-2
Posted by Andrew Fraknoi at 5:03 PM