Planet Discovered Around the Nearest Star 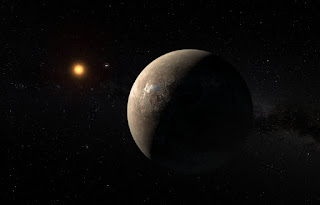 Astronomers at the European Southern Observatory are announcing today that they have found an Earth-sized planet orbiting the nearest star to the Sun, Proxima Centauri.  The star is only 4.2 light years away (which is roughly 25 thousand billion miles – that’s close for astronomers!)

The newly found planet takes 11 days to orbit its reddish star (compare that to Mercury, the closest planet in OUR solar system, which takes 88 days to go around the Sun.)   You might think that a planet that takes only a week and a half to orbit its star must be outrageously hot, but the difference is that Proxima Centauri is a much fainter and cooler star than the Sun.  So the planet could be in the star's habitable zone (liquid water may possibly exist on its surface.)

We found this planet, as we have many others, not by getting a picture of it, but by measuring the pull of the planet on the star.  As the planet circles the star, from one side of it to the other, the planet’s gravity, small as it is, makes the star wiggle just a little bit.  And it’s this wiggling of the star that we can detect from Earth and use it to estimate the mass (gravity) of the planet.

This method can only tell us the minimum mass that the planet must have, and that turns out to be 1.3 times the mass of the Earth. (The wiggle, by the way, only changes the motion of the star by about 3 miles per hour, toward us and then away from us.  That’s a tiny change, but modern instruments are able to make out changes in speed that small.)

A planet with that low a mass is most likely a solid rocky planet, like ours.  Being so much in the gravity embrace of the star, the planet may have one side permanently pointed toward it, much like our Moon has one side permanently pointed toward the Earth as it goes around us. The Proxima Centauri planet would then also rotate in 11 days, making its day and its year the same length!   That’s weird to think about.

The fastest planetary probe we have built so far would take something like 80,000 years to get to Proxima Centauri.   It’s hard to get graduate students to volunteer for that kind of trip!  But, as you may have heard, Yuri Milner, the Russian-American billionaire physicst, has, earlier this year, pledged a hundred million dollars for a research effort to develop a mini-probe, smaller than the smallest cell phone, yet with working instruments, that could ride powerful laser beams and get to the nearest star system in only 20 to 25 years.

Clearly, Project Breakthrough Starshot, as it’s called, will now focus on Proxima Centauri, the nearest of the three stars in the closest star system.  Bets have been on one of the other two stars (called Alpha Centauri, after the brightest in the pair) to have planets, but the first discovery belongs to Proxima.  What an exciting time to be alive.

Above is an artist's conception of what Proxima would look like from the planet's vantage point, and below is a diagram with key characteristics of the Proxima system compared to our own. 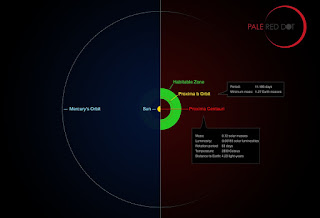