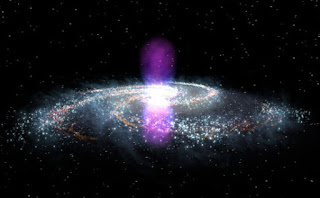 Observations with a number of telescopes, including the Hubble, have now dated a kind of burp in the eating habits of the giant black hole at the center of our Milky Way Galaxy. It appears that about six million years ago, the central black hole "ate" a large cluster of stars and the neighborhood around it was energized by the process of the meal.


Black holes are regions where material (starting with dead stars) has collapsed so much, that nothing, not even light, can get out. The black hole at the center of our Milky Way now includes enough material to make more than 4 million stars like the Sun! It's what we call a "supermassive black hole" and lurks in the middle of our Galaxy like a giant speed trap for unwary stars or star groups that get too close.
As material is in the process of being "swallowed" by the black hole, it glows with desperate radiation, just before it falls in and disappears from view. A great bubble produced by the black hole as it ate its last serious meal has now been tracked by astronomers with much greater precision.
Just like the sound of the burp your uncle makes (after a heavy Thanksgiving meal) can travel through the dining room, so the bubble from this last meal can be seen traveling through the Galaxy like a giant expanding shell. The shell was probe by the Hubble as the light of distant objects raced through it and astronomers were able to measure the speed of the bubble's motion.
Six million or so years ago, it appears that a large clump of stars or gas (the raw materials of stars) was consumed by the black hole, making two "Fermi bubbles" in the Galaxy. Since then, the black hole has only been "snacking" -- tearing apart and eating an occasional star or random bit of gas. But no serious meal has made a big bubble from the mouth of the black hole since then.
Our diagram shows how in the six million years since that meal, the bubble has expanded at speeds of two million miles per hour and made a giant bubbles north and south of the black holes that extend for tens of thousands of light years. That kind of puts your uncle's last burp into perspective!
Posted by Andrew Fraknoi at 11:52 PM