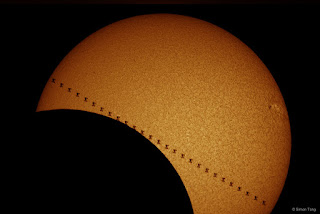 My favorite picture so far of the recent eclipse of the Sun is the one you see with this post. Photographer Simon Tang (who gave me permission to reproduce it here) took a sequence of photos from Huron, California, recording the International Space Station crossing the face of the Sun just as the Moon was eclipsing it.
Each of the images of the Space Station is less than 1/1000th of a second long, since the Station moved across the Sun in less than a second. The image is taken in H-alpha, a specific color of light emitted by hot hydrogen atoms in the Sun's lower atmosphere. You can see the Station close up in our second image.


NASA reports impressive statistics for the Aug. 21 eclipse: 90 million page views on NASA's two websites, 40 million views of the live broadcast, 3.6 billion users on social media, and the most popular Instagram image ever -- all of a celestial event with no politics, no national or religious affiliation. It was just nature, doing its thing, predictably, reliably, spectacularly.
In our own project, 2.1 million eclipse glasses were distributed to 7,100 libraries -- all to be given away free to the public. I was one of the astronomers leading the effort, and want to thank the Moore Foundation, Google, and NASA, for supporting the program to allow public libraries to help their patrons observe the eclipse safely. If only we could come together this well about other things! 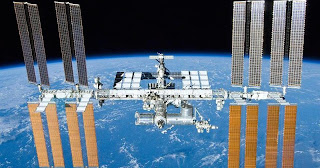 Posted by Andrew Fraknoi at 3:54 PM