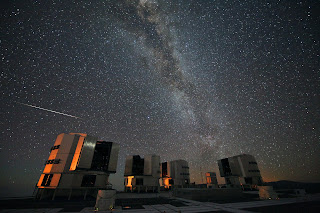 This Sunday evening and Monday morning, there will be one of the best meteor showers you and your family can watch – the Perseids.    And since the Moon will not be in the sky during this shower, dark skies will make it easier for even casual viewers to spot a good number of “shooting stars.”

The best night is the evening of Aug. 12th and morning of Aug. 13th, although there could be significantly more meteors in the sky on the night before and the night after too.  Meteors or “shooting stars” (which have nothing to do with stars) are pieces of cosmic dust and dirt hitting the Earth’s atmosphere at high speed and making a flash of light.  These flashes could happen anywhere in the sky, so it’s best to view the shower from a dark, wide-open place.  See the list at the end for viewing suggestions.

The Perseid meteors are cosmic “garbage” left over from a regularly returning comet, called Swift-Tuttle (after the two astronomers who first discovered it).  The comet itself returns to the inner solar system every 130 years or so; it was last here in 1992.  During each pass, it leaves dirt and dust behind and it is this long dirt and dust stream that we encounter every August.

Each flash you see is a bit of material from the comet hitting the Earth’s atmosphere and getting heated up (and heating up the air around it) as it speeds through our thick atmosphere.  Both the superheated dust and dirt and the heated air contribute to the visible light we observe.  Since comets are left-overs from the early days of our solar system, you can tell yourself (or your kids) that each flash of light is the “last gasp” of a bit of cosmic material that formed some 5 billion years ago.

MY EIGHT HINTS
FOR “TAKING A METEOR SHOWER”

[The photo shows a Perseid meteor over the Very Large Telescope at the European Southern Observatory in Chile.]

Posted by Andrew Fraknoi at 9:41 AM