A Super-Earth in a Zone Where Life May be Possible 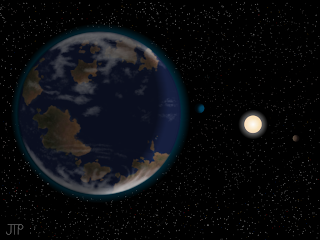 away. The image here shows an artist's conception of this planet, which -- fair warning -- may not look anything like the Earth or this picture! It is the kind of planet we call a Super-Earth -- in this case it may be 7 times as massive as our planet or more. (No such planet exists in our solar system, so we don't know what it might be made of or would look like.  For example, we don't know if such Super-Earths are made mostly of rock like the Earth or mostly of gas and liquid, like Jupiter.)

Still, the newly discovered planet is one of six planets orbiting a quiet old star known only by its ugly catalog number HD40307. Of the six, the new planet is the only one at the right distance from the star that conditions on it (or perhaps one of its moons, if it has any) might be right for liquid water and life as we know it. The planet takes 198 Earth days to go around its star, and since the star is cooler than the Sun, that orbit turns out to be just right.

This is not the first Super-Earth that astronomers have uncovered in the habitable zone of its star, but it is the closest and the most interesting so far. Planet news just keeps rolling in, and we may someday look back at these decades following the discovery of the first planet outside the solar system (in 1995) as a golden age of planet discovery.  Recall from earlier posts that the Kepler mission (the big camera in space) is continuing to find a slew of planets and has thousands of candidate planets which scientists are checking out.  Stay tuned for more planet discoveries in the months and year ahead.
Posted by Andrew Fraknoi at 9:14 PM