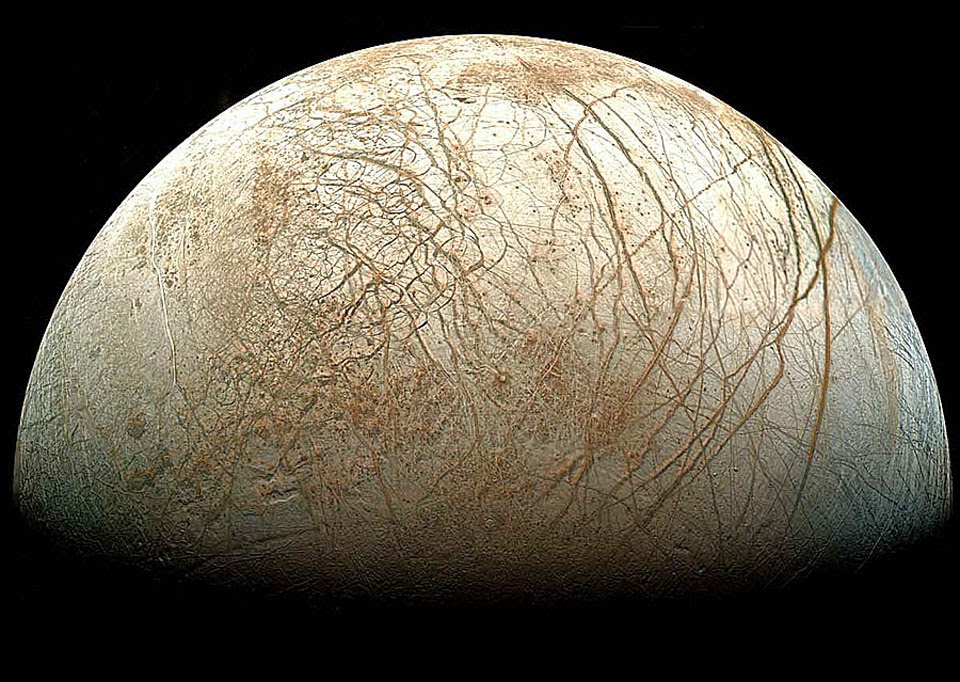 Last night, thanks to the Wonderfest organization in San Francisco, I got a chance to see a science fiction film that was in theaters for so short a time that if you blinked, you probably missed it. It's called "Europa Report" and it is the story of a crewed expedition to Jupiter's intriguing moon Europa. This world, one of the four large moons of Jupiter discovered by Galileo, is an ice-covered ball that may well have a large liquid ocean under its surface.

You can see Europa's cracked surface on the picture I have posted above. (This is actually a montage of images from NASA's Galileo spacecraft, with additional image processing by Professor Ted Stryk to bring out more detail.) One possibility is that the dark cracks we see are places where material from deeper inside the Moon (perhaps even from the liquid ocean) is seeping up toward the surface.

In the movie (see the poster below), future astronauts (from a private space company) go to Europa to search for evidence of life. The complex story is told by interweaving the view from cameras in their suits and in their cabins, with footage they recorded for sending back to Earth and interviews with the mission controllers, who eventually lose contact with the ship. What the surviving astronauts eventually find is far more than the micro-organisms scientists currently hope might exist deep under the ice of Europa.

The film, by Ecuadorian director Sebastian Cordero, is now available on DVD and various internet film services. If you enjoy somewhat complicated but scientifically reasonable space stories, I commend it to your attention. If not, spend a little time Googling other images of Europa and check out one of the strangest worlds with which we have the pleasure of sharing the solar system.

Posted by Andrew Fraknoi at 8:27 PM