The Revenge of the Dwarf Planets 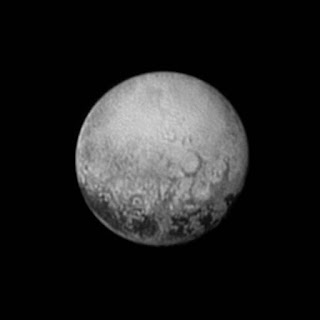 This coming Tuesday, July 14th, humanity will -- for the first time -- fly by the world formerly known as planet Pluto.  Actually, the New Horizons spacecraft will be flying by a double world, because Pluto has a giant moon, Charon, which is half its size.  I can't wait to see the pictures.

In fact, see the Pluto image with this post -- it's from yesterday and already shows intriguing spots and circular areas.  Check out the even better new pictures and information as they are revealed this coming week and month.  You can find them at: http://pluto.jhuapl.edu/

When the data from the flyby are returned to Earth -- and they will take a year to download (and you think your connection is slow!!) -- we will have completed our first-look exploration of all the main worlds known when most of my readers were born.

Pluto was "kicked out of the planet club" only because a whole bunch of other "Plutos" were found beyond Neptune.  Pluto turned out to be the first of its kind (found by Clyde Tombaugh at Lowell Observatory in 1930), but now we've found Eris (which is the same size as Pluto) and several other round icy worlds that are smaller versions of them.  We probably should have picked a less insulting name than dwarf planet, but we used the word dwarf successfully in combination with star and galaxy, so we didn't anticipate so much public hostility to it.  For the full story, see: http://www.pbs.org/seeinginthedark/astronomy-topics/planets-and-pluto.html

A few of Clyde Tombaugh's ashes are aboard the New Horizons craft.  You can read his own story of the discovery at: http://astrosociety.org/wp-content/uploads/2013/02/ab2009-23.pdf 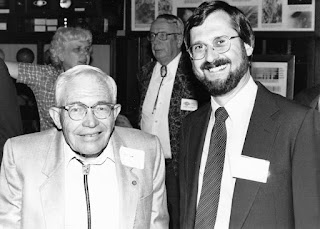 Here is Clyde Tombaugh with your friendly blogger in 1985

Pluto is known to have four smaller moons, and others may yet be discovered in the coming weeks.  Pluto also has a thin changeable atmosphere, which instruments will be investigating as we fly by.

Another world that got reclassified in the Pluto saga was Ceres, the largest asteroid, which is now also called a dwarf planet.  Ceres is the only member of the asteroid belt between Mars and Jupiter to be round.  The Dawn spacecraft is settling into a lower and lower orbit around Ceres this summer and fall, and will be sending back never-before-seen details of what this intriguing world (about the size of Texas) looks like.

So it's going to be a summer of dwarf planet discovery.  They are going to be in the news so much, maybe we'll forget the issue of the name and enjoy them for what they have to tell us about the history and diversity of the solar system.

If you are really into the Pluto encounter, the most comprehensive post about what's happening is Emily Lakdawalla's at: http://www.planetary.org/blogs/emily-lakdawalla/2015/06240556-what-to-expect-new-horizons-pluto.html

Posted by Andrew Fraknoi at 6:35 PM