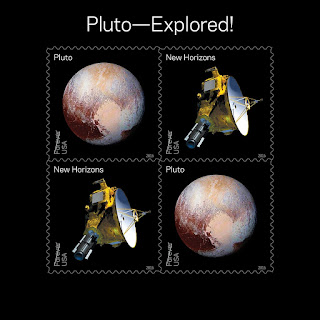 The U.S. Postal Service is going to release the set of two Pluto and New Horizons stamps in 2016 that you see pictured here. There has been an interesting connection between stamps and the Pluto mission.
In 1991, back when Pluto was still a planet, the U.S. issued a set of stamps showing close-up photos from space missions to all the planets except Pluto. The Pluto stamp was a drawing, and said "Not Yet Explored." This stamp so annoyed Alan Stern and and other astronomers who had been arguing for a Pluto mission, it gave them new energy to pressure NASA to approve a Pluto flight.
In 2006, just before New Horizons was launched, the scientists put one of those annoying stamps aboard the spacecraft and it was thus part of the mission that flew by Pluto last July. Having a U.S. stamp eventually leave the solar system amused the Postal Service people, and the new stamp of what Pluto actually looks like (with that nice heart shaped feature) is the happy result.
The Postal service is also planning to issue another set of stamps of the 8 planets (not including any pesky dwarfs this time) and a Star Trek commemorative series. See the full information at: https://www.nasa.gov/…/postal-service-honors-nasa-planetary…
Happy New Year to Fans of the Solar System and Stamp Collectors Everywhere! May your heart find fulfillment in the year ahead, just like Pluto's did..
Posted by Andrew Fraknoi at 4:14 PM