A Mini-Pluto at the Edge of Our Solar System 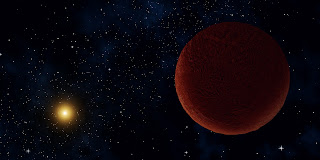 Astronomers have better measurements now of what is turning out to be a smaller version of Pluto located so far away that it may take 1,100 years to orbit the Sun. Nicknamed D.D. (or DeeDee) for Distant Dwarf, this remarkable small world appears to be about 400 miles in diameter -- only about 1/4 the size of Pluto, but possibly still big enough to be round like a planet.
D.D. was found in the fall of 2016 by a team of astronomers led by David Gerdes of the University of Michigan. As so often happens in astronomy, they were looking for something completely different, but found D.D. as part of their work. Now they have used an array of radio telescopes, called ALMA, to measure D.D.'s size and also to estimate its temperature. Ninety-two times as far from the Sun as the Earth is, D.D. is thought to be at minus 405 degrees Fahrenheit (minus 243 degrees Celsius; or only 30 degrees above nature's limit, absolute zero.) 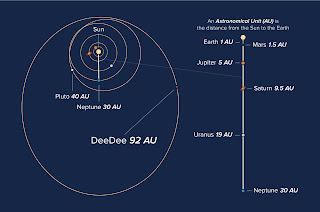 D.D. is part of a whole zone of icy objects out beyond Neptune (astronomers call them Trans-Neptunian Objects or TNO's,) About 2,000 TNOs are now known, but most of them are too small and irregular (knotty potato-shaped) to be called dwarf planets. Pluto, the first TNO dwarf planet, was discovered in 1930, but in the last decade of the 20th century and the first decade of the 21st century, others were found, including Eris, Makemake, and Haumea. (If the names sound unusual, it's because we are trying now to name these outer worlds after mythological beings from many cultures, not just the ancient Greeks or Romans!)
We need more observations of D.D. before we are ready to call it a dwarf planet. If you thought that Pluto was being insulted when we called it a dwarf planet, perhaps it will help you to know that Pluto is the "first" of a whole new category of worlds. Five dwarf planets are now officially recognized by the International Astronomical Union, and at least six other worlds out beyond Neptune may eventually be included in the group. It may be years before we know if D.D. will join them. 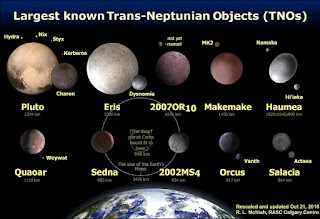 But it's wonderful to see the Sun's family growing in this way, with our new instruments and surveys able to find worlds that literally are "far out!"
Posted by Andrew Fraknoi at 4:05 PM