A Weird-looking Moon in a Gap in Saturn's Rings 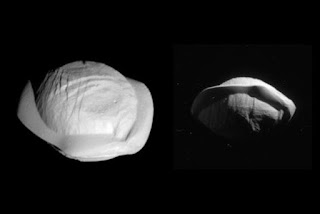 Since 2004, the sophisticated Cassini spacecraft has been orbiting Saturn, sending back remarkable pictures of the planet, its rings, and its moons.   Now, with its fuel running out, the little spacecraft is being directed closer to Saturn’s rings, to get us even better views of this spectacular region (before Cassini does a Kamikaze dive into Saturn Sept. 15th.)

The image above is a fantastic close-up of one of the strangest moons we have ever seen.  The small moon Pan orbits inside the Encke Gap, an emptier region in Saturn’s bright A ring (Saturn’s different rings are given letter names.)  Pan looks like a “flying saucer” – with a set of high ridges around its equator.  It's about 22 miles across at its widest point.

Astronomers think that Pan formed inside Saturn’s ring and, as it grew, its gravity helped clear out the material in the gap which it now rules.  But there was enough material still in the flat ring neighborhood that it fell onto Pan’s equator and made the giant ridges that make Pan so distinctive.

Over the next few months, as scientist program Cassini to dive again and again into the space between Saturn’s and its rings, we will continue to get better images of “things in the rings” (sounds like Dr. Seuss) than we ever have before.  It’s a fitting finale for a spectacular space mission.

The image below shows you the neighborhood.  You can see Pan, its shadow, the Encke gap, and the A ring. 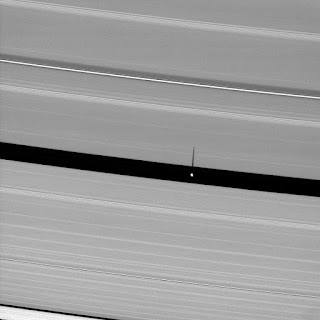 Posted by Andrew Fraknoi at 5:13 PM