New Views of the Planet Jupiter 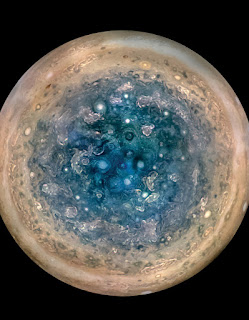 The first results are in from the Juno mission exploring the giant planet Jupiter, and there are many surprises.
Look at the beautiful image here (click on it to see it bigger), showing the first detailed views of Jupiter's south pole region. The colors are a bit exaggerated, but the structures are real. You are seeing giant cyclones and anti-cyclones, as large as 600 miles across! That's extreme weather the 11 o'clock news team doesn't even dream about.


I'll remind you that Jupiter is not a solid planet -- most of it is made of gas and liquid. Yet there is enough material inside the giant planet to make 318 Earths. Scientists did not know whether at its very center it might have a small solid core or not. Heat from within rises and various molecules move up and down, producing complex bands, zones, and storms in the upper atmosphere.
Additional Juno discoveries include that Jupiter has a bigger core than expected, but that it has a fuzzy-looking structure, as if it were not sharply defined. The giant magnet inside Jupiter that surrounds it with the most powerful magnetic zone of any planet was also found to be stronger than anticipated.
Furthermore, the northern and southern lights on Jupiter are excited not only by charged particles captured from space (as we have on Earth) but also, unexpectedly, from charged particles coming from inside Jupiter.
As usual, when we get better instruments focused on a world or process in astronomy, we find that some of our old assumptions or ideas will need to be revised. That's what makes astronomy so much fun.

Below is an image showing 14 days of the Juno spacecraft approaching and then moving further away from Jupiter's cloudy atmosphere. (Click on it to make it bigger.)

Posted by Andrew Fraknoi at 7:22 PM