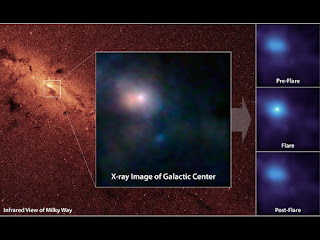 A new observatory in space has caught the giant black hole at the center of our home galaxy in the process of having a snack. We know that the at the very heart of the Milky Way there lurks a black hole with as much material inside as 3 - 4 million Suns. When material falls into such a black hole, just before it enters, it gets very hot by friction and gives off (not light but) a glow of x-rays.


Once material falls into a black hole, then no light or x-rays can escape from it. But just before any such stuff goes to its doom, we do see a flare of x-rays from it. It is just this sort of flare that the NuSTAR satellite detected in July (just about a month after it was launched). It wasn't really a full meal for the black hole, merely an afternoon snack, but the temperature of the glowing gas cloud before it fell in was an astounding 180 million degrees Fahrenheit.

The so called "super-massive" black hole at the center of our Galaxy is a relatively small one, compared to some of the really massive black holes in the centers of other galaxies.  Some of these have billions (thousands of millions) of times the mass of our Sun contained within them.

If you are already a black hole fan, such observations will probably just confirm your view of how weird black holes are. But if you are not sure what black holes are, I might recommend a little video that the SETI Institute made of me during a family event there. It's a brief, friendly explanation of just what black holes are and why falling into one is a "once-in-a-lifetime experience." You can see it at:
http://www.youtube.com/watch?v=7DX_cc-IjpY

Extremely Deep View of the Universe 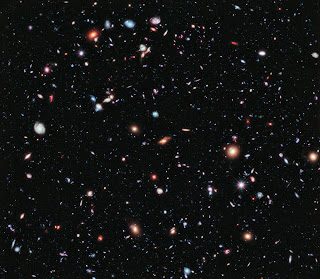 Last month, the Hubble Space Telescope released one of the most impressive astronomical images ever taken and I wanted to share it with you. Called the Hubble Extremely Deep Field, it shows a tiny, tiny portion of the sky in the constellation of Fornax -- a portion about the same size (angle) in our sky as one of the smaller dark splotches (maria) you can see on the Moon.


Between 2002 and 2012, a team of astronomers kept photographing this same bit of sky over and over again for 2 million seconds (almost 23 days) and the results, as you can see, are spectacular. Almost every bit of light you see on the accompanying picture is a galaxy (a collection of millions and, more likely, billions of stars). Some are so far away, light from them is estimated to take 13 billion YEARS to reach us!

This means that when you look at the faintest objects in this picture you are looking almost back to the beginning of time (the Big Bang is estimated to have taken place 13.7 billions years ago.) Some 5,500 galaxies are visible in the small frame of this image and they range in distance and time over billions of lightyears and years. In such images, which are like core samples in geology, astronomers can study the history of structure and matter in the universe.

The Hubble scientists have done this before, taking previous sets of deep images called the Hubble Deep Field and then the Hubble Ultra-deep Field.  But the current image (above) shows by far the deepest view (seeing the faintest galaxies and light from longest ago.)
Posted by Andrew Fraknoi at 9:33 PM 2 comments:

Planet Found in Closest Star System to the Sun 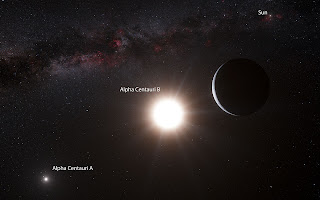 European astronomers have announced a science-fiction dream come true. A planet is orbiting one of the stars in the nearest star system to the Earth -- Alpha Centauri. This system consists

of two stars orbiting a common center in 80 years (and perhaps a third star, even further out.)

The smaller star of the main pair, called "Alpha B" is the one where a planet has been found. Astronomers use the "wiggle method," where they detect the pull of the planet by changes in the motion of the STAR. (The star is bright and can be seen, while the planet is small and dim and lost in the star's glare. So we had to find the planet by the pull of its gravity on its parent star.) It took FOUR years of careful measurement to tease out the tiny wiggle caused by the planet's pull!

The planet is small (roughly like the Earth) but much closer in than we are to the Sun. This new planet (for now called "Alpha Bb" -- we astronomers are NOT good at romantic names!) takes only 3 days to orbit its parent star. That means it is only a little more than 3 million miles away from the star (while the Earth is 93 million miles from the Sun.) The planet must be intensely hot and hardly a place to build a resort for space travelers.

Still, this is amazing and wonderful news for several reasons:

1. It's great to have a planet in the star system next door (and that system may yet reveal other planets too.) Alpha Centauri is about 4 lightyears away.

2. It's great that our instruments can make so precise and tiny a measurement at star distances (the change in the star's motion due to the planet's pull is only about 1 mile per hour) and this means other small planets may also be found using the wiggle method.

3. With over 842 planets now known for sure orbiting 664 other stars (and thousands more suspected), this discovery is one more piece of evidence that planets can exist not just among single stars like the Sun, but in systems of stars too. 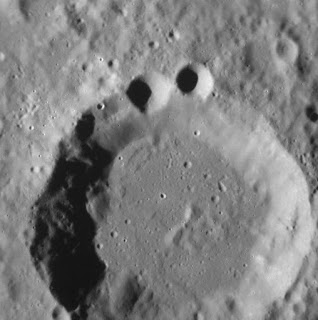 In view of the sudden importance that Big Bird and Sesame Street have assumed in the national presidential campaign, you may be amused that just recently, astronomers examining images of the battered surface of the planet Mercury have released this image of a large crater and several smaller ones that resemble "Cookie Monster."

Such images remind us of the flap, years ago, about the so-called "Face on Mars," which, in an early crude image, sort-of, maybe reminded some people of a face.  Like the Cookie Monster on Mercury, it was a perfectly natural land form on Mars, which happened vaguely to resemble something familiar.
Posted by Andrew Fraknoi at 8:51 PM 1 comment: