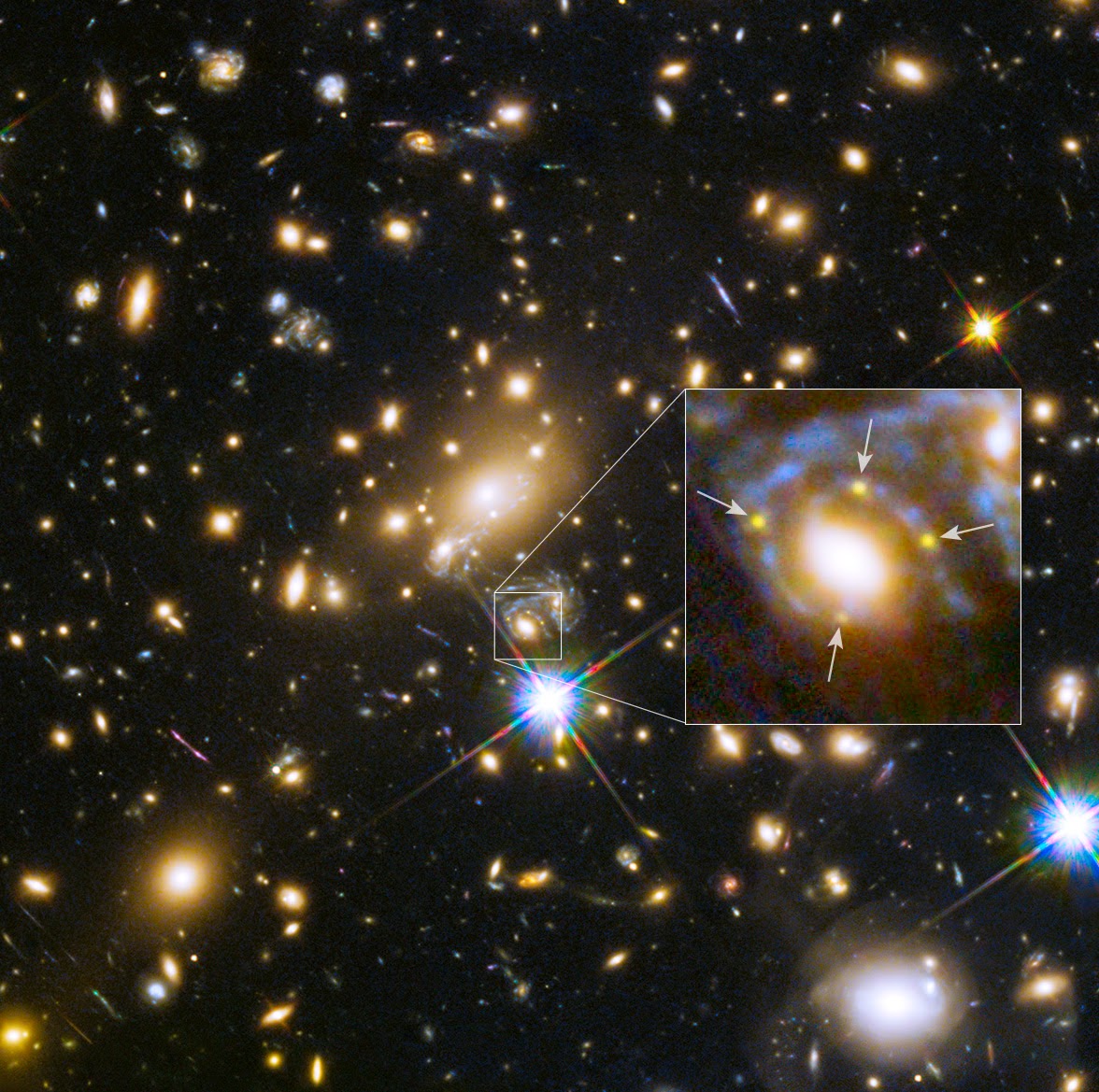 This year, we celebrate the 100th anniversary of the first publication of Einstein's greatest masterpiece, the General Theory of Relativity.  Now astronomers using the Hubble Space Telescope have found a remarkable quadruple image of a distant exploding star which helps confirm another of that theory's most "far out" predictions.

The General Theory connects space, time, and gravity in mind-boggling ways.  Strong gravity can actually warp (or bend) space and distort the flow of time.  One example of gravity strong enough to do this is a dense cluster of galaxies, like the one shown on our image.  Everything on this Hubble picture that is not a point of light (everything with a shape) is a galaxy of billions of stars.  The cluster contains many such galaxies orbiting a common center.

Light from more distant objects behind the cluster has to go through the strong gravity of the cluster on its way to us.  Einstein's theory predicts that as gravity warps space, the light from behind the cluster will have to travel through that warped space and will get twisted and bent in eerie ways.  From the right angle, a single beam of light can be split into four similar images, something called an "Einstein Cross."  That's just what you see in the inset on the picture.

Most amazingly, the four images of the exploding star took slightly different amounts of time to get to us through that warped space, and so we are seeing the same explosion at four different time periods.  By studying the details of such complex "gravitational lenses" (as the distortion by the galaxy cluster is called), astronomers hope to learn more about how all the "stuff" in those galaxies is distributed and how much of it is regular matter and how much is dark matter.

The galaxy cluster only has a catalog number, not a name, but we know it is about 5 billion lightyears away (meaning light, traveling at the fastest permitted speed in the universe, took five billion years to reach us.)  The exploding star appears to be four billion lightyears further than that -- meaning we are seeing its light from 9 billion years ago.  The only reason we can see it at all is that the gravity of the galaxy cluster actually intensifies the light as well as splitting it -- just as Einstein's theory predicts.

What a wonderful image with which to celebrate the 100th anniversary of a theory that Einstein's called "the happiest thought of my life!"

Coming Up: Pi Day, Einstein’s Birthday, and Dawn at Ceres 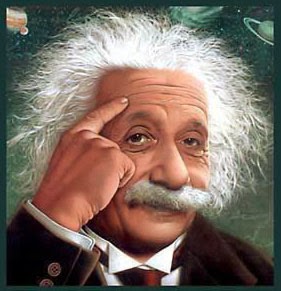 Saturday, March 14, 2015 is “pi day” – the only day this century that includes the first five digits of pi or 3.1415…   This year, several groups are suggesting that this might be a good day for celebrating math and science in general – and raising our voices in favor of evidence-based, well-reasoned decisions in our public life.  It’s a time we can share with others our conviction that evolution is well-established fact, that climate change is being accelerated by human activities, and that NASA did indeed land people on the Moon – all ideas being denied on the web, in the media, and in our political discourse.

March 14th is also Albert Einstein’s birthday (he was born in 1879 on that day.)  This year, we celebrate the 100th anniversary of Einstein’s first paper on the General Theory of Relativity, the brilliant insight that connects gravity, light, space and time.  This anniversary is part of a larger physics commemoration – celebrating 2015 as the International Year of Light.  At Foothill College, I will be offering my evening Physics 12 class (Physics for Poets), all about Einstein’s life and work, explained without math.  It ends with recent contributions to our understanding of the universe by Stephen Hawking (whom I was pleased to see getting the Academy Award for best actor :-))

We can also celebrate the big development in the solar system: The Dawn Spacecraft just went into orbit around the largest asteroid in the asteroid belt, Ceres, which, by virtue of its size and round-ness, also qualifies as the first dwarf planet to have been discovered (in 1801).  Dawn is the first spacecraft ever to orbit two worlds on the same mission, thanks to its advanced ion-propulsion technology.  (It orbited the second largest asteroid Vesta, from 2011 to 2012 and then made its way across 900 million miles of space to Ceres.)  We are expecting remarkable close-up images of and data from Ceres as the year goes on and Dawn achieves closer and closer orbit. Stay tuned.

For the latest on the Dawn mission, see the blog by Mission Director Marc Rayman: http://dawnblog.jpl.nasa.gov/

For a syllabus of my Physics 12 (Einstein) class, see: www.foothill.edu/physics/Physics.12.Web.pdf

For a guide to resources for answering conspiracy-theory "true believers", go to: http://www.astrosociety.org/education/astronomy-resource-guides/astronomical-pseudo-science-a-skeptics-resource-list/ 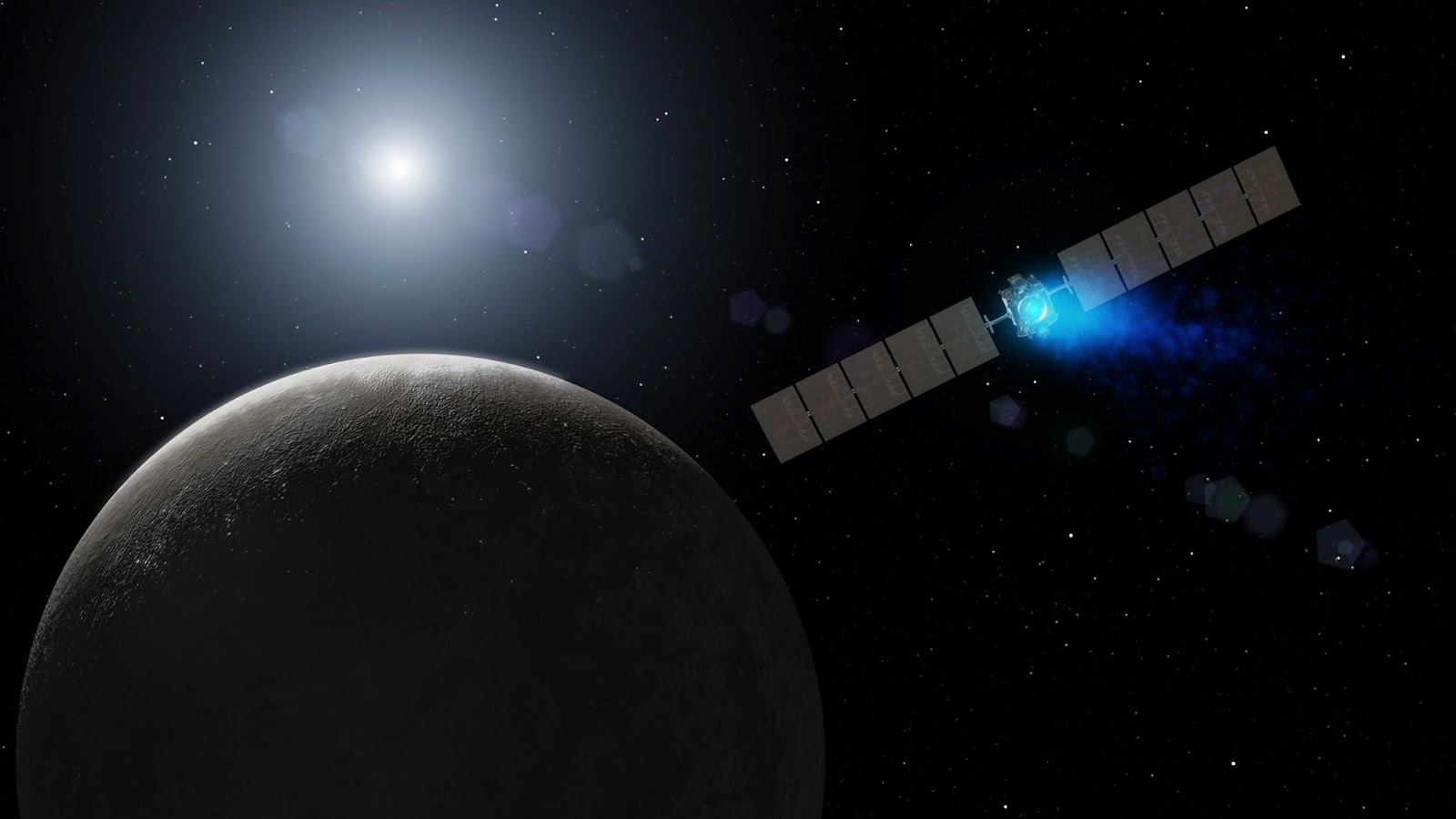 Painting of the Dawn Spacecraft Near Ceres (NASA)