Evidence for a Stream on Mars 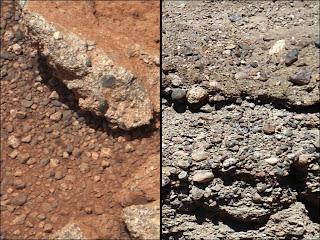 The first significant result from the Curiosity Rover in the deep Gale crater on Mars is the discovery of a set of rocks that look like they were shaped by a small river or stream of flowing water.

Here is a picture with the Mars rocks on the left and rocks from an Earth stream bed on the right. Look how similar they are!


Scientists estimate that the stream of water on Mars that (long, long ago) produced these gravel formations was running at about 2 miles per hour. It was somewhere between ankle and hip deep.

That's great news. We landed in Gale Crater because pictures from orbit gave us hope that it had been full of water at one time. Now we have "ground-truth" for that idea.

The gravel pieces on both pictures are too big to have been moved around by wind. It takes a fluid like water to knock these pieces together over the long time that water flowed. Within each rock, the largest gravel fragments are a couple of inches or so wide. (Scientists call this kind of rock a sedimentary conglomerate, and these are made by flowing water cementing rock fragments and smaller material together.) Both the kind of rock and the rounded shape of the fragments are strong arguments for a flowing stream of water on Mars. And our journey on Mars with Curiosity is just starting out!

For another image and the story from NASA, see: http://science.nasa.gov/science-news/science-at-nasa/2012/27sep_streambed/

Posted by Andrew Fraknoi at 6:21 PM