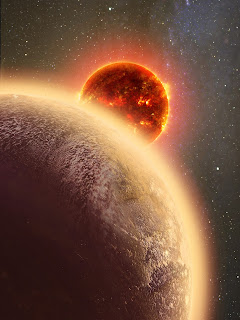 A newly discovered planet is as hot as your oven at full strength and takes less than two days to orbit its star.

As the number of confirmed planets orbiting other stars nears 2000 (when just twenty years ago, that number was zero), we are finding many planets that are not like any we know in our own solar system. The new planet orbits a red dwarf, a star 200 times fainter than our Sun, called GJ1132. (GJ stands for Gliese-Jahreiss, the name of two German astronomers who produced a remarkable catalog of the stars closest to our Sun.)

Astronomers used telescopes around the world to pin down the characteristics of the new planet, which is just 39 light years away, very close by cosmic standards. It turns out to be a rocky planet, a little bigger and more massive than Earth.

But it is so close to its star it takes only 1.6 days to go around. (In other words, a year on that planet would be just 1.6 Earth days. That means an Earth 10-year old would be about 2280 years old on that planet!)

At so close a distance (only a million and a half miles away from its star), the planet experiences temperatures on the order of 450 degrees Fahrenheit. So it reminds us more of superhot Venus in our solar system than our own Earth. Interestingly, other planets known to be rocky that we have discovered orbiting other stars are even hotter. (Hot, close planets are easier to find, so they are over-represented among our early discoveries.)

Still, if for some reason, you need a turkey cooked really fast this week, perhaps a quick trip to GJ 1132b (as the planet is boringly designated) would be in order. Or just give thanks that you live in a cooler planet which takes its time orbiting the Sun.

[P.S. The image is just an artist's impression. We can't photograph such small close in planets -- they are lost in the glare of their star.]
Posted by Andrew Fraknoi at 7:16 PM