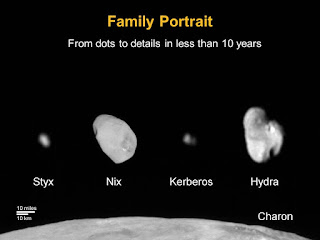 Pluto has five moons around it and one of them, it was reported today, spins 89 times for each orbit it makes around Pluto. Hydra, the outermost of Pluto's four tiny moons, takes 38 Earth days to go once around the dwarf planet. During that time, it rotates 89 times.

For a hypnotic video of the motion of all the moons, see:http://www.seti.org/…/defau…/files/dps-slides-showalter1.mp4

(Note that on the video, the moons are not to scale. In real life, the outer 4 moons are much much smaller than Pluto and the giant inner moon Charon, which is about half of Pluto's size. But the motion you see on the video is real.)

Hydra is the purple object on the video. The moon colored yellow, called Nix, spins almost fourteen times during one of its orbits. (The colors mean nothing on the video; they just help our eyes tell the moons apart.)

Astronomer Mark Showalter of the SETI Institute, who discovered two of the moons, is part of a team that suspects that the tumbling of the moons is caused by the extra pull that the giant moon Charon adds to the pull of Pluto in this system.

Another interesting fact about the motions in the Pluto system is that Pluto's day is equal to Charon's month.  In other words, Pluto rotates at the same rate as its giant moon orbits it.  That means Pluto and Charon are synchronized -- one side of Pluto always has Charon above it as it turns, and the other side of Pluto never sees Charon.

By the way, it also appears from the New Horizons data coming back to Earth that Hydra and Kerberos (the green colored moon) are each made of two smaller chunks of ice that "merged" into one close system early in Pluto's history. Perhaps all four of the small moons are the result of such mergers. So here are two chunks of cosmic material living together intimately for billions of years. Perhaps the Tea Party fundamentalists and Supreme Court Justice Scalia might not approve of such a "marriage" between icy chunks, but I think it's pretty cool.
Posted by Andrew Fraknoi at 10:12 PM