Streaking on Mars (and "Spiders" Too) 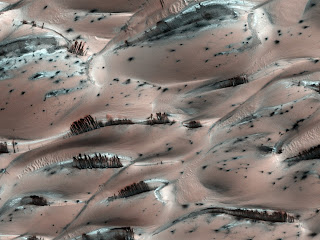 Sometimes pictures from other planets are so intriguing, you almost have to stop your eyes from making snap judgments.  What do you see on the above image from the north pole region of Mars?

It almost looks like some sort of weird plant growth, doesn't it?  But it's NOT!!! Nothing like plants could grow in the thin atmosphere of Mars, with relentless and deadly ultraviolet light from the Sun beating down on the dry surface.

What we are seeing here are streaks of darker sand rolling down the incline of pinkish sand dunes.  This was taken during the spring, when warming temperatures on Mars evaporate the dry-ice coating (white color) and free the darker sand to fall down hill.   Look carefully -- none of those tall dark "plants" show a shadow!  To give you a sense of scale, this picture is about 1 kilometer (a little more than half a mile) across.

But what a wonderfully eerie picture those streaks of dark sand make across the martian landscape.  You can already hear the "conspiracy theorists" saying that NASA is hiding the news of dark trees growing on Mars!  The image, by the way, is from the wonderful  HiRISE camera aboard the Mars Reconnaissance Orbiter spacecraft.

Something similar can be seen, if you check out the following summertime image from Mars' south pole region: 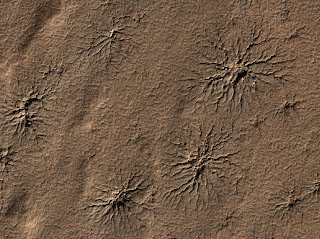 Here all the dry-ice (carbon dioxide) frost has evaporated -- that's what happens in summer.  Where the frozen dry-ice is trapped underground, and then makes its way to the surface, it can leave grooves in the ground -- all aimed toward the central point where the gas finally built up enough pressure to escape.  Seen from above, these features look like spiders.  They are actually channels etched into the surface about 3 to 7 feet deep.

This spidery scene is about 3/4 of a mile across.  HiRISE took this one too.  Will someone in Hollywood soon be making a movie about giant spiders on Mars?
Posted by Andrew Fraknoi at 6:18 PM