"Rain" on the Sun: Remarkable Video 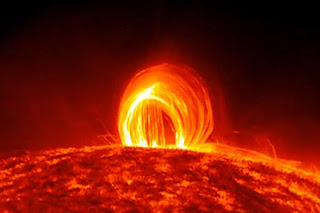 Scientists working with the Solar Dynamics Observatory (SDO) -- a Sun-observing mission in space -- have released a wonderful new video of activity on our home star.  I recommend you view it on a nice screen and enjoy the speeded-up action:

When the active, seething, magnetic outer layers of the Sun erupt from time to time, they release vast loops and flows of charged particles.  You may have seen iron filings or small nails trapped by a home magnet and aligned into rounded patterns.   In the same way, the Sun's magnetic influence captures some of these particles and they flow back downward toward the Sun along huge rounded loops. Scientists have nicknamed this downward pouring of hot particles "coronal rain" -- after the outermost layer of the Sun, its corona (or glowing crown).

Launched in 2010, SDO is in an orbit 22,000 miles above the Earth, where it can monitor the constantly changing face of the Sun.  The movie you will see was taken on July 19, 2012 and is speeded up so each second you are seeing is six minutes of real time on the Sun.  The music, of course, is added by the film-makers (there is no sound in space), but it's very atmospheric and lets your imagination really accept the down-pouring of charged particles as a kind of rain.

Bear in mind, though, that the round filaments of hot charged particles returning to their home on the Sun are each much longer that the size of planet Earth (which is shown briefly on the video for scale.)  The temperatures that generate the glow in these images are around 90,000 F (50,000 C).  The energies in these burst and showers of particles dwarf our puny activities on Earth, yet are routine for the Sun.
Posted by Andrew Fraknoi at 8:27 PM