In a galaxy with lots of raw material (like our own Milky Way), baby stars are forming all the time.  But some galaxies have run out of the gas (and dust) for making new stars, leaving them barren, with no further opportunities for "childbirth."  Now a new observation of a small galaxy shows how the raw material for stars can be stripped out of a galaxy by outside circumstances. 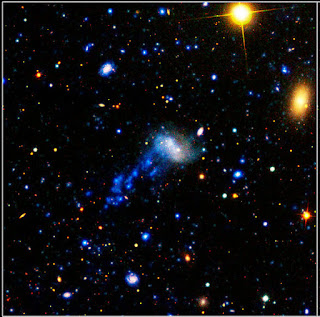 This is not the first time astronomers have been intrigued by the appearance of the little galaxy known by its catalog number IC3418.  In 2010, the GALEX satellite observed ultraviolet light from the galaxy and first revealed that it had a "tail" -- streamers of gas that had been removed from IC3418 and were following behind it.  Now, new research gives us a better understanding of just how the little galaxy got stripped of its life-giving gas.

IC3418 is falling through a giant collection of galaxies called the Virgo Cluster.  Consisting of some 1,500 galaxies and lots of superhot gas, the Virgo Cluster is our nearest big cluster of galaxies.  Because the Virgo Cluster is full of hot gas, when little IC3418 falls through it, its own gas is stripped out.  (The cluster's hot gas can't affect the stars of a galaxy, which are heavy, but can strip away the lighter gas.)  It is this stripped away gas you are seeing as a tail in our picture.  The removed gas makes some new stars as it gets compressed and it's their glow we see.  But by leaving its parent galaxy, the gas in the tail deprives IC3418 of the fresh gas it needs to make new stars.

This makes IC3418 an old barren galaxy long before its time. It's as if the interaction with the big Virgo Cluster made it age right before our eyes.  The stripping of gas works so well because the speed with which the little galaxy moves through the cluster is 2 million miles per hour!  (Don't try speeds like this at home without adult supervision.)

For a beautiful picture of some of the thousands of galaxies that make up the Virgo Cluster, check out: http://apod.nasa.gov/apod/ap110422.html

The new observations were reported by a team led by astronomer Jeff Kenney of Yale, and were reported at the meeting of the American Astronomical Society going on this week in Indianapolis.

Posted by Andrew Fraknoi at 7:24 PM