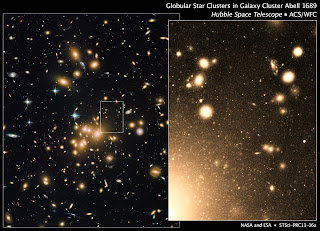 A huge cluster of galaxies so far away that light from it takes 2.2 billion years to reach us has revealed itself to be a record-breaker. It has the largest number of star clusters ever seen in one place and it is farthest place in the universe where we have seen star clusters.

To appreciate this story, you have to distinguish between the two kinds of clusters we're discussing. Stars are often born in groups called "star clusters" and the largest and most impressive of these are called "globular clusters" (because their stars are organized into a big globe-shaped collection of 100,000 stars or more.) Our Milky Way Galaxy has about 150 of these globular clusters and they are among the oldest and most crowded places in our home galaxy.

The late George Abell (an astronomer at UCLA and the author of a famous textbook from which astronomers in my generation first learned astronomy) made a catalog of these galaxy clusters, and the one we are discussing is entry 1689 in his catalog.

A new study of the central region of Abell 1689, made with the Hubble Space Telescope, reveals 10,000 globular clusters of stars in a small region of the galaxy cluster. The astronomers who carried out the work estimate the throughout the entire galaxy cluster, there may be as many 160,000 of these giant old star clusters -- a record unequaled anywhere else we have looked so far.

At a distance of 2.2 billion lightyears, Abell 1689 is also the farthest location in the universe where we have seen a globular cluster.

In the attached picture, you can see part of the cluster of galaxies on the left and then a close-up where the globular clusters look like little yellow dots among the bigger galaxies.

For a scan through the galaxy cluster, you can check out this YouTube video: http://www.youtube.com/watch?v=bumxssc9Cdo
(On this scan, you can also see faint rounded arcs of light -- those are direct proof of one of Einstein's ideas -- that the huge gravity of the galaxy cluster acts like a "gravitational lens" and bends the light of other galaxies behind it into arc like shapes.

We have seen other rich clusters bend light from objects behind them, but the effect is especially clear on this beautifully detailed image.
Posted by Andrew Fraknoi at 11:04 AM