Astronomers Find a Planet Like Mars in a Distant Star System 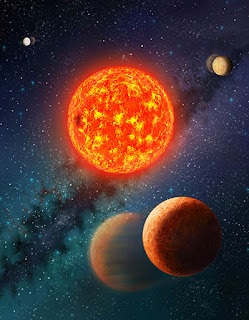 A team of astronomers has found the equivalent to planet Mars in a star system with three planets 200 light years away.  This is the planet with the lowest mass found so far around any normal star.  That’s because the methods that allow us to find the masses of planets (how much they weigh) generally work best for planets that are heavier.  Here a wonderful combination of circumstances allowed the team (including Jason Rowe of the SETI Institute) to make their record-breaking measurement.

The nameless star system is given the catalog designation Kepler 138, because the three planets, orbiting a cooler star, were first discovered by the Kepler spacecraft.  Kepler allows astronomers to find planets when they move across the face of their stars, causing a tiny eclipse (or “transit.”)  Tremendously accurate instruments aboard Kepler measured the decrease of light when each planet got in front of the star.

The three planets are each closer to their star than Mercury is to our Sun.  The planet that resembles Mars, closest of the three, takes only 10.3 days to go around.  In other words, a year on that planet is 10 Earth days.  Think how often you’d have to celebrate annual events, like your birthday!

The present team of astronomers (which also includes members from NASA’s Ames Research Center and Penn State) followed the three planets’ transits over time and noticed that they did not occur at the same time each orbit, because the gravity of the other two close planets was tugging on each one.  By measuring the size of the tugs, the astronomers could derive the gravity (mass) of each planet, something that is otherwise very hard to do.

Now here is the clever part.  When we watch a planet go in front of its star, that allows to measure how big the planet is (its diameter).  Bigger planets block more light.   So for these three planets, we now had the mass (from the tugs) and the size (from the transits).  Most of the time, when they find planets around other stars, astronomers only have one OR the other.

Since we have both in this case, that allows us to calculate the density of each world. If a planet is dense, it is likely to made mostly of rock, like Earth is.  If a planet is not so dense, it combines rock with ice or even perhaps melted ice, such as the liquids we find inside Jupiter and the other partly liquid planets in our solar system.

This is what allowed the team to say with some certainty that the inner planet in the Kepler 138 system is about the size of Mars and about the same composition as Mars.  The planet is roughly 10% the mass of Earth and half the size of Earth, just like Mars is.   This is the smallest world for which we have both size and mass.

Almost 2000 planets are now known around other stars, a remarkable number, given that the first one was discovered just 20 years ago.  What amazes us is the variety of planets out there.   There are huge planets, bigger than Jupiter, but orbiting very close to their stars.  There are planets we are calling super-Earths, that are intermediate in size between Earth and Neptune.  And now we know that there are smaller, solid worlds like Mars.  Some smaller worlds are really close to their stars, like the one around Kepler 138, but others are much further out, like Mars is in our solar system.   Nature likes diversity in astronomical settings, much as she likes it for people.

(For a nice "infographic" about the Kepler 138 system compared with our solar system, see:
http://www.space.com/29690-small-alien-planet-kepler-138b-facts-infographic.html  )
Posted by Andrew Fraknoi at 7:26 PM