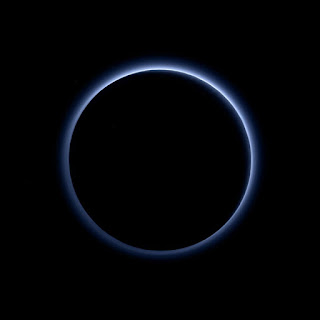 The New Horizons team just released a great new image of Pluto in front of the Sun. If Pluto had no atmosphere, it would just have blocked the Sun's light for the camera. But Pluto's thin (but significant) atmosphere scatters blue light more than red, just like Earth's air does, and so we can glimpse blue skies (or at least blue haze) around Pluto in the picture.

The haze layers in Pluto's atmosphere (seen more clearly in the black and white photo below) are made of slightly larger particles than Earth's haze layers, a kind of alien soot.

The lower image, showing Pluto at sunset, shows how the haze has several layers in it. The atmosphere is a thin mixture of nitrogen, carbon monoxide, and methane. Not a place where you want to (or can) take a deep breath! Astronomers think the atmosphere of Pluto is a bit thicker when it's closer to the Sun in its 250-year orbit, and then freezes out when it moves away from the distant sun for most of its plutonian year.

Also on the lower image, you can see the contrast between the mountainous higher lands on Pluto, and then in the middle of the picture, the smoother frozen plains that interrupt them. Only about 10% of the images and data have been sent back by New Horizons so far, so we have much more to learn about the little planet we visited briefly in July.

(As always, click on the photos, to see more detailed versions. Feel free to pass the pictures and information on, if you like them.)

Posted by Andrew Fraknoi at 7:16 PM