We Fly Through the Geysers Coming from Saturn's Moon 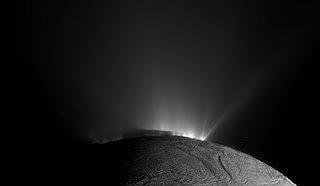 Planetary scientists believe that there is likely to be an ocean of liquid water under Enceladus' crust. (The name, by the way is pronounced "En - salad - us," not as hard as it first looks.) You can see some of the deep cracks through which the water emerges in the foreground on our top image. Below is a drawing of how scientists imagine the moon's structure could be arranged inside.

We will know more about what the plumes are made of when the data are analyzed in coming weeks. Even from further away, previous flyby's have already identified some of the most basic chemicals that are the earliest building blocks of life in the plumes.

How a small frigid moon way out where Saturn orbits -- a moon only 300 miles or so across -- can have an underground ocean and geysers is still a puzzle, but it shows us that we should not take even the smaller moons in the outer solar system for granted.

As always, you can see the pictures in more detail if you click on them.  For more information on the Cassini mission, see: http://saturn.jpl.nasa.gov/ 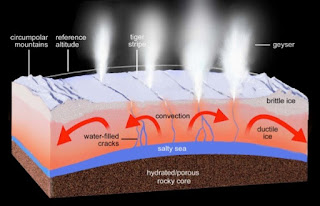