There is a Possible Super Earth in the Outer Solar System 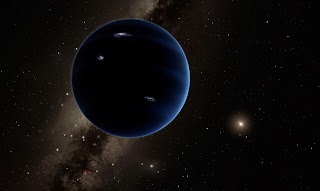 Out there, way beyond the Sun's family, astronomers have discovered thousands of planets orbiting other stars. Among these alien planets, we have discovered a significant number of "Super Earths" -- planets more massive than our Earth but less massive than the smallest giants in our solar system, Uranus and Neptune. Our solar system has no such Super Earths, but many other systems do; they may be quite common.
Now, Michael Brown and Konstantin Batygin at Caltech, propose that we might just have a Super Earth in our solar system, but so far from the Sun, it takes between 10,000 and 20,000 years to make one orbit! (Pluto, for comparison, takes about 250 years.)
Brown and Batygin have been examining the orbits of icy chunks way beyond Pluto, in the region we call the Kuiper Belt. There are several chunks out there, including one Brown discovered in 2003, called Sedna, that move in an oddly aligned way. After testing many computer models to explain their odd orbit, their best model indicates there could be a planet 10 times the mass of our own Earth, whose stronger gravity is affecting the motions of many objects out where it orbits. Just a few of the affected chunks have been discovered so far and the planet itself has NOT be seen.
So this is a somewhat daring hypothesis, which the two astronomers explain in this brief video: https://www.youtube.com/watch?v=6poHQ2h00ZA
Please note that our image is a painting that Caltech commissioned. No one knows what this Planet Nine looks like.
Now here is the human side of the story. Michael Brown led the team that discovered Eris, the dwarf planet that is the same size as Pluto, in 2005. When he discovered it, he told his wife that he had just discovered a tenth planet and she had made a good decision in marrying him. Alas, instead of being acknowledged as the 10th planet, Eris caused astronomers to rethink the status of Pluto, and remove it from being the 9th planet. Brown was gracious about it, but you can imagine how disappointing it all was for him.
So now Brown may have "discovered" (or at least predicted) a real new planet. He is already nicknaming it "Planet Nine" and it's so big, no one will be able to call it a dwarf! If it is confirmed one day, he can go back to his wife and tell her, "Well, maybe I only discovered a dwarf planet before, but now I have discovered a real planet at last." Not a bad thing to discuss over dinner!
You can see a video where Brown discusses his role in the Pluto and Eris story at: https://www.youtube.com/watch?v=7pbj_llmiMg 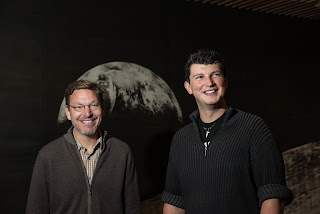