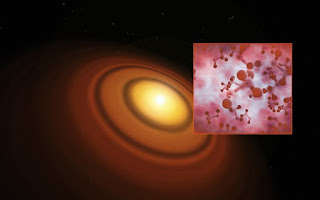 The national organization of professional astronomers (the American Astronomical Society) is meeting in San Diego this week, and there is BIG news from the meeting: More gravity waves, wood alcohol in space, and a big Tatooine-like planet.
Scientists working with LIGO (the Laser Interferometer Gravitational-Wave Observatory) have announced their second discovery of gravity waves. (The first was announced in February.) Once again they observed two giant black holes coming closer and closer and then merging into a bigger black hole. In the merger, some of the mass in the system is converted to energy, and comes out as the waves of gravitational energy Einstein predicted about 100 years ago.
The black holes that merged were 14 and 8 times as massive as our Sun, somewhat smaller than those in the first discovery. Scientists estimate that the black hole that came out of the merger had as much stuff as 21 Sun. This means an entire Sun's worth of mass was converted to energy -- explaining why we could detect the gravity waves, even though such waves are much, much weaker than other waves we know and love, like radio or x-rays.
In the second discovery, a team of astronomers from around the world used the giant ALMA array of radio telescopes in Chile to measure the presence of alcohol in the planet forming disk of a young star 170 light years away. Alas, the kind of alcohol they found is what we call "wood alcohol" or methanol, not the drinkable version. Still, this is the first detection of one of the complex building blocks of life in the region around a newly formed star that is making planets as we observe it.
We have found many of the basic chemical building blocks of life in comets, in chunks of rock that fall from space, and especially in the great clouds of raw material (gas and dust) from which new stars form. But this is the first time we see the "fingerprints" of such a molecule in the flat disk around a star which is the nursery from which planets like Earth and Jupiter emerge. The name of the star is TW Hydrae in case you want to search for more information. (Our image shows an artist's impression of the disk and the molecules of methanol.)
And, finally, in a discovery that is bound to warm the hearts of Star Wars fans everywhere, astronomers have announced the discovery of the ninth, the largest, and the furthest planet orbiting two stars. Such a world could have two suns in the sky at the same time -- just like Tatooine, Luke Skywalker's home planet.
The newly discovered planet, called by its catalog number Kepler
1647b, is about the size of Jupiter and takes three years to orbit its star. The star system is about the same age as our own. And most intriguingly, the new planet orbits in the "habitable zone" of the double star -- meaning that the temperature in the planet's neighborhood would be comfortable for water and life as we know it.
Now Jupiter-sized planets are probably mostly gas and liquid, like Jupiter is, and have no surface for life to evolve on. But such planets may have large solid moons, like Jupiter and Saturn do. On such moons, an atmosphere and oceans may form and remain, so that an environment for life may yet exist in this strange, beautiful system. (We can't find moons yet, only planets, so for now, we have to leave such thoughts to the science fiction writers.)
And those three are only the most interesting of the many discoveries announced at the meeting. We really do seem to be living in a golden age of observational astronomy!
Posted by Andrew Fraknoi at 5:10 PM