A Tight Little Planet System, Dancing to the Tune of Gravity 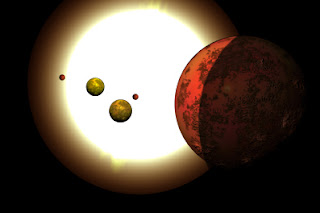 Careful measurements using information from the Kepler planet-hunting spacecraft has allowed astronomers to figure out one of the tightest and most synchronized planet systems ever found.
Kepler 80 is a dim star in the constellation of Cygnus the swan, 1100 light years away, that has five planets orbiting it. That by itself is not unusual -- astronomers have now discovered a number of stars with 7, 6, or 5 planets around them and more are likely to be discovered as time goes by. What IS unusual is how tightly these five planets all hug their star.


The five planets take one, three, four, seven and nine earth days to orbit the star. (Think about that, their year is 1, 3, 4, 7, or 9 DAYS! If you lived on the inner planet, you would be 365 of its years old after one Earth year had gone by.)
Even more interesting, the outer 4 planets have orbits that are synchronized -- they are in tune, you might say. They return to the same arrangement of their positions around their star every 27 days. This is called a gravitational resonance and it's something gravity prefers to do when bodies can exchange energy.
Think of gravity like your uncle who is careful with his money -- they both prefer arrangements that are cheap! For example, gravity, when it can, tries to make bodies round, because then the pull on every point on the surface is the same -- which is the arrangement that takes the least energy.
When objects in space move around or with each other in a synchronized way, where one orbit is related to the other with numbers like 1 to 2 or 2 to 3, this requires less energy too. Pluto, for example, shows an extreme example of such resonances: Pluto takes 6.4 Earth days to spin and Pluto's big moon Charon takes 6.4 days to orbit the dwarf planet. So Pluto's day and month are the same length. Charon also takes 6.4 days to spin, so we have a 1 to 1 to 1 resonance of these motions.
Calculations show that the planets dancing in resonance around Kepler 80 are rocky world like our own Earth, although at least some of its planets are 4 to 6 times Earth's size. Imagine these giant Earths whipping around that little star in Cygnus in 1 to 9 days, year in and year out, lining up every 27 days in a kind of cosmic dance. Nature seems to permit so many odd and wonderful line-ups of planets out there -- science fiction is having trouble catching up to science fact.

(Just for comparison, the innermost planet in our own planetary system, Mercury, takes 88 days to orbit the Sun, and it is much smaller than Earth. So we have no large planets tightly hugging our star -- but a number of other stars besides Kepler 80 show such tight arrangements.)
Posted by Andrew Fraknoi at 6:13 PM