A Photo of the Earth and Moon from Mars! 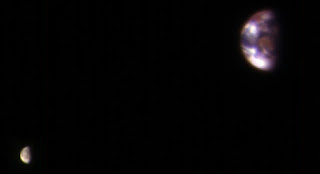 NASA has just released a remarkable image of the Earth and the Moon as seen from a spacecraft orbiting Mars. Our planet and Mars were 127 million miles apart when the photo was taken.
The Mars Reconnaissance Orbiter (MRO) has been orbiting Mars since 2006, collecting very detailed close-up images and data about the surface of the red planet. In this case it was used to capture a photo of Earth and Moon with both bodies in the same frame. The image was taken at a time when the Moon was behind Earth as seen from Mars, so it shows the Earth-facing side of our natural satellite.
Even at Mars' distance, the image of the Earth reveals continents. Australia is the reddish-brown feature in the center. Seeing ourselves as a tiny disk of light in the blackness of space can help remind us that we share a fragile and beautiful planet in our journey through space.
Posted by Andrew Fraknoi at 6:32 PM