New Year's Day Will Have a Supermoon 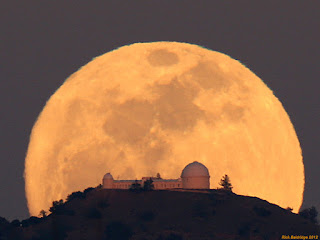 By a cosmic coincidence, the first day of 2018 will have a nice full Moon in the evening. And the full Moon occurs just when the Moon is closest to the Earth in its monthly orbit, so it will look a little bigger to us in the sky.
Since 2011, the media have followed a suggestion by an astrologer (!) and started calling these slightly closer full Moons "Supermoons" -- a name more likely to make people notice. We astronomers tried to fight the term, but we're mostly giving up.


On January 1, the Moon will be closest (at perigee) at 2 pm, Pacific time: it will be 221,600 miles from us. (The average distance is about 239,000 miles.) The full Moon officially happens only 4 hours or so later, at around 6 pm Pacific time.
So when the full Moon rises, in the evening, as the Sun sets, it will looks somewhat bigger and brighter than usual. It's no big deal, except to reporters eager to fill news copy during the holidays when news is slow. Still, it's always nice to have an excuse to notice the full Moon and show it to kids in your family or neighborhood.
Remember, the Moon is the only world other than Earth on which humans (12 of them) have stood and explored. Even just with your naked eye (but better with a pair of binoculars), you can see some of the bigger round craters on the Moon, evidence of the ancient violence that was common in the early days of the solar system. More than four billion years ago, large chunks of rock and ice were still moving around the system, hitting the forming planets and moons.
January 2018 is a blue-moon month (meaning two full moons will happen in the same month) and the second full moon, on January 31, will be more impressive. It will include not only a Supermoon, but a total eclipse of the Moon!
That eclipse will be best on the West Coast, but it will happen early in the morning. So you'll have to get up at 5:30 or 6 am on a Wednesday morning to see the full Moon fully eclipsed. I will have a much more detailed preview of the eclipse in this column when it's a closer in time.
Our photo, by astro-photographer Rick Baldridge, shows a full Moon seen above the historic Lick Observatory near San Jose.  Click on it to see it bigger.
On a personal note, I have just launched my own astronomy website at http://www.fraknoi.com and invite you to check it out. It's still a work in progress.
Posted by Andrew Fraknoi at 11:03 AM