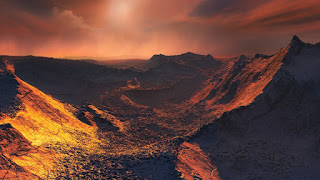 An international team of astronomers is announcing the possible discovery of a planet around the second closest star system to us, Barnard’s Star. A mere 6 light-years away, the star is a faint red dwarf which gives off only four hundredths of a percent of the Sun’s light energy. The planet, which could be as massive as 3 Earths, is orbiting at the same distance as Mercury is from the Sun, but is still colder than Saturn and unlikely to harbor life as we know it.
Since the closest star system to us also has a known planet in it, this discovery (if it is confirmed) would make it even more likely that planets are “more common than dirt” out there. Four planetary systems would then be known among the stars 10 light-years or closer. Some 2900 planetary systems (containing almost 4,000 planets) have now been found in our galactic neighborhood.
The new planet, which takes 233 days to orbit, was detected from the very slight “wiggles” that the planet’s gravity (as it goes around) gives to the motion of its star. The wiggles are so small that it took 20 years of observations, using special equipment on various telescopes around the world, to identify them. While it’s still possible that their combined observations have another explanation, the 63 authors on the paper announcing the planet have dug deeply into their data statistics and claim that the planet idea is the most likely explanation. Not all experts in the field agree that this is a definite detection. Instruments of the future, with better ability to detect tiny star wiggles, will ultimately decide if the planet is real.
Our image shows an artist conception of what the the “cold, hostile desert” surface of the planet around Barnard’s Star, with a temperature of -270 degrees Centigrade, might look like. (You will need to take your parka if you go.)
Posted by Andrew Fraknoi at 10:10 PM