Astronomers have just announced the first indication that a star seen to explode in 1987 has left behind a “neutron star” – a kind of weird star corpse that is more compressed than any other structure in the universe.  It’s a discovery that has long been hoped for by astronomers to confirm that our ideas about the deaths of massive stars are correct.

Smaller stars, like our Sun, die a relative peaceful death, where they simply collapse under their own weight until they become kind of solid.  But the bigger stars become unstable and blow up at the end of their lives, in an explosion astronomers call a supernova.  Most such explosions leave behind a core so compressed that, in it, atoms as we know them cease to exist.  Instead, electrons are squeezed into protons to make neutrons, essentially removing all empty space within each atom. The result is a tight ball made mostly of pure neutrons.

To make something this dense on Earth, we would have to take all the people in the world and squeeze them into one raindrop!  An entire star collapses to be about the size of a small U.S. suburb.  How could we find such a “squozen” star corpse?  It turns out these neutron stars are very hot after they form and can heat any left-over gas and dust around them.

The most recent nearby supernova explosion that astronomers know of was seen in February 1987 in a satellite galaxy that orbits our Milky Way.  It is given the very unimaginative name Supernova 1987A, being the first one seen in 1987.  Searching the central regions of the remnant of this supernova, astronomers, using the big array of radio telescopes called ALMA, have recently found a super-hot blob of material right where the neutron star was expected to be.  All the characteristics of the blob indicate that is a heated cloud of dust and gas hiding a hot neutron star within.

It will be decades before the material around the neutron star is cleared out and we can get a glimpse of the star corpse itself.  But for now, the detailed properties of the blob tell us that it is most likely hiding just the kind of neutron star astronomers were hoping to see. 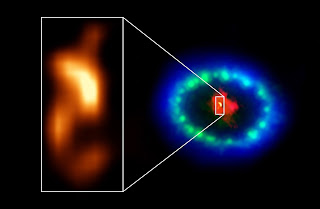 (In our radio image, you see a wide ring of material around the dead star, set to glow by the particles of the explosion that reach it. The inset shows the central region, with the hot blob glowing bright in radio waves.)

Posted by Andrew Fraknoi at 8:21 PM

Email ThisBlogThis!Share to TwitterShare to FacebookShare to Pinterest
Labels: star death, Supernova 1987A