An Amazing Image of Saturn's Rings for the Holidays 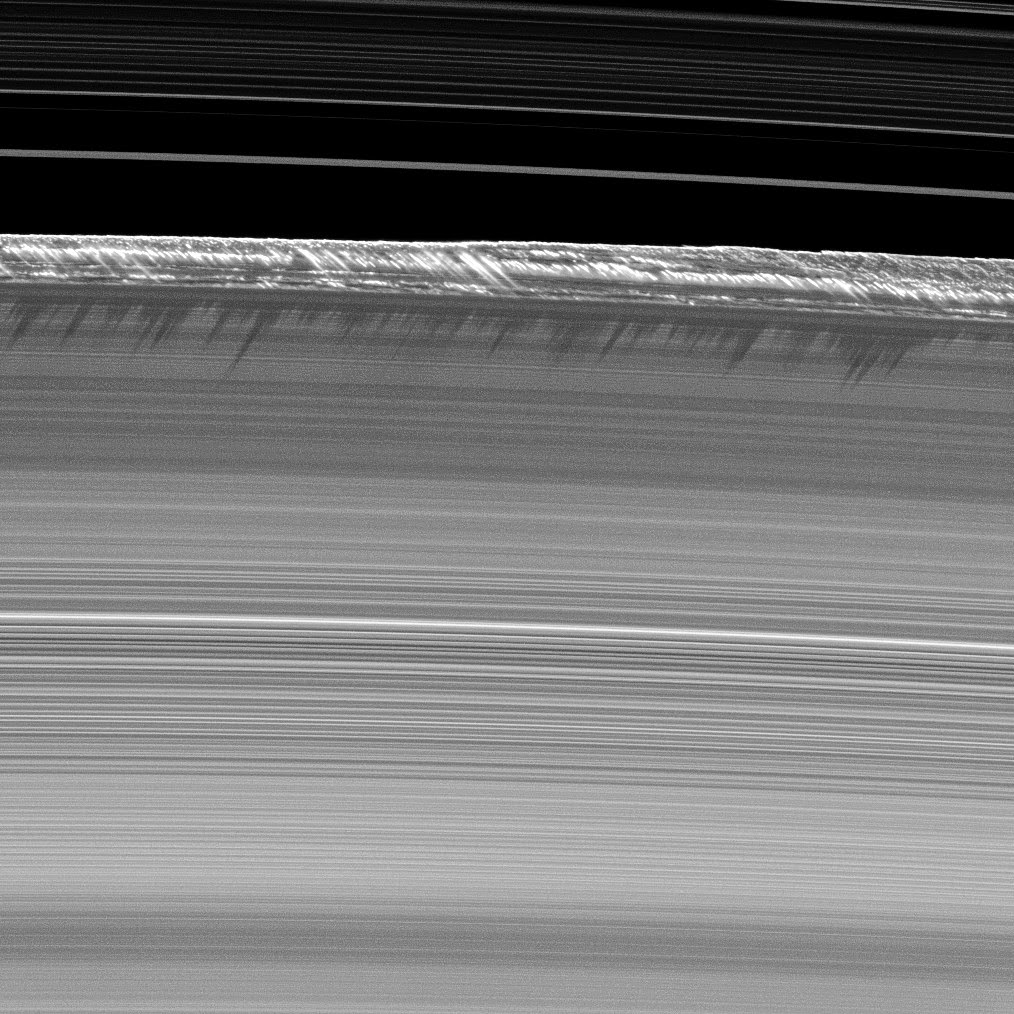 Carolyn Porco, the dynamic leader of the Imaging Team for the Cassini Mission (exploring Saturn and its neighborhood), has sent a remarkable holiday greeting card from Saturn and I wanted to share it with you.

What we are looking at is a view of the inner part of Saturn's complicated ring system (mainly the so-called B ring.) We are seeing about 750 miles of the white rim of the B ring, beyond which is the dark emptier space called the Cassini Division. You can see a number of thin "ringlets" in that division toward the upper part of our picture.

But what is really stunning is what the long shadows cast by the Sun reveal at the edge of the bright main ring. You can see peaks or thin mountains of ice particles, sticking up more than a mile and a half (2 km) above the plane of the rings. Compare those heights with the typical height of the ring system, which is about 10 meters (or about 30 feet) in most places.

Here is what Carolyn says about the image, "Cassini scientists believe that this is one prominent region at the outer edge of the B ring where large bodies, or moonlets, up to a kilometer or more in size, are found. It is possible that these bodies significantly affect the ring material streaming past them, and force the particles upward, in a "splashing" manner."

She continues, "This image [taken in 2009] and others like it are only possible around the time of Saturn's equinox, which occurs every half-Saturn-year, or about every 15 Earth years. The illumination geometry that accompanies equinox lowers the sun's angle to the ring plane and causes structures jutting out of the plane to cast long shadows across the rings."

The rings of Saturn are made of billions and billions (as Carl Sagan used to say) of individual chunks of ice -- mostly water ice. The particles range in size from smaller than a sand grain to larger than a modern SUV. We have known for some time that the interaction of moons and rings in the Saturn system can create a wide range of artistic patterns using the ring particles as their raw materials. But these tall icicles or icy towers are among the most spectacular we have ever seen.

Happy Holidays. May 2015 bring all of us more amazing views of our cosmic environment and increase our understanding that the differences that separate us on Earth are so trivial compared to the truly alien nature of what's out there.

[Click on the image to make it bigger and see even more detail!]

Posted by Andrew Fraknoi at 5:45 PM