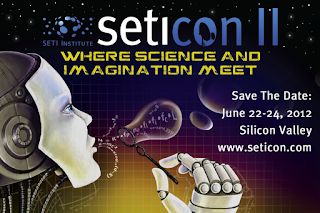 Next month, the nonprofit SETI Institute (the organization devoted to the search for life in the universe) will be holding a big weekend public event in the San Francisco Bay Area which I will be part of. For those of you who will be (or could be) in the area, here is more information about some of the remarkable people who will be joining me:

* Frank Drake, the astronomer who undertook the first project to listen for extra-terrestrial radio messages and founded the SETI field
* Alan Stern, principal investigator for the New Horizons mission to Pluto and former associate administrator for science missions at NASA
* Robert J. Sawyer, award-winning science fiction writer -- who has written some of the best novels about alien contact
* Rosaly Lopes, planetary scientist at the Jet Propulsion Lab and one of the world's experts on volcanoes on other worlds
* Jill Tarter, the leader of the quest to find signals from alien civilizations -- on whom Jodie Foster's character in the film "Contact" is based

* Mae Jemison, Shuttle astronaut and the first African-American woman in space (who played Lieutenant Palmer on "Star Trek: Next Generation")
* Geoff Marcy, astronomer at the University of California, Berkeley, who is considered the foremost planet hunter in the world today
* Alex Filippenko, part of the team that received the 2011 Nobel Prize for discovering the "dark energy" that is speeding up the expansion of the entire universe
* Robert Picardo, television actor who has appeared in "Star Trek: Voyager," "Stargate," "China Beach," and other programs
* Debra Fischer, of Yale University, co-discoverer of the first system of planets around another star

* Seth Shostak, host of "Big Picture Science", Huffington Post columnist, and the public scientist at the SETI Institute
* Alex Hall, the senior director of the $30 million Google Lunar X-Prize
* Richard Rhodes, Pulitzer-prize winning author and historian of the atomic bomb
* Scott Hubbard, Stanford, NASA's first Mars Program Director and the former director of NASA's Ames Research Center
* David Morrison of NASA, who has been the point person in debunking the myth of Doomsday 2012

* plus members of the Kepler Mission science team, authors, artists, and many of the key scientists from the SETI Institute.

(Confession: I have the pleasure and privilege of being the Vice-chair of the Institute's Board of Trustees.  However, I am not being paid to be at the convention or for anything I do for the Institute, so I am not gaining financially in any way by sharing this information with you. I always like to be very clear about such things.)

Posted by Andrew Fraknoi at 9:13 PM