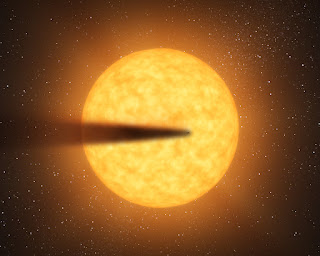 From Dust to Dust: A Planet Too Close to Its Star

Astronomers have used the Kepler Observatory (a giant camera in space that is searching for evidence that planets orbit other stars) to make a remarkable discovery.  They found a planet taking only a little more than 15 hours to orbit its star.  Think about that figure!  Our own Earth takes 365 ¼ days -- what we call one year -- to orbit the Sun. Even heat-scorched Mercury takes 88 days to go around our star.  A planet whose “year” is only 15 hours must orbit extremely close to the star and must thus be exposed to searing heat.

Indeed this planet is so close that the heat of its star appears to be evaporating its rocky surface and creating a cloud of dust, which we can see blocking the star light on each orbit. This planet is doomed to become nothing but dust in the next 200 million years or so, calculations show.  The temperatures at its surface are estimated to be 3300 degrees Fahrenheit.

The star and planet are about 1500 light years away, so we are not likely to be visiting them any time soon.  But if you go, be sure you take a good asbestos space suit.

For more on the story, see: http://www.nasa.gov/centers/ames/news/features/2012/Kepler_Detects_Potential_Evaporating_Planet_feature.html
Posted by Andrew Fraknoi at 12:54 AM