In this beautiful picture, you can see what the NASA publicity team is calling the "Promised Land" on Mars. The slope of Mount Sharp beckons in the distance in this color image taken by the Curiosity Rover's mast camera. The Mars light, by the way, has been adjusted on this image to show you what the scene would look like in Earth sunlight.   You can see that they have added a white bar on the mountain which is 2 km, or about 1.2 miles, wide.


The highest point on Mt. Sharp rises about 3 miles above its base. Note that in the picture, the lower parts of the mountain are darker than the rest. It is this dark region that we believe was covered with water long ago and is expected to show us the chemical and mineral traces of having been long submerged.

Also check out the image below for a bird's eye view (or more precisely, a spacecraft's eye view) of where Curiosity is now (green dot), where it is going first (Glenelg blue dot), and where it will approach Mt. Sharp (the blue dot in the center). Note that the elevation rises as you move toward the bottom right in this picture. 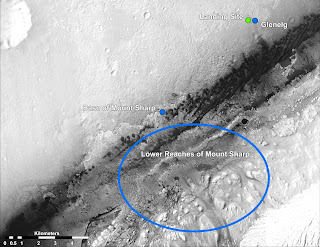 Today, Curiosity fired its laser beam for the first time at a rock on Mars, with 30 pulses over 10 seconds. This vaporizes the rock, so that Curiosity can measure very precisely what it is made of. Scientists using the ChemCam instrument were delighted with the information coming into their little "mini-telescope" from the flash of the vaporized rock.  For more information, see: