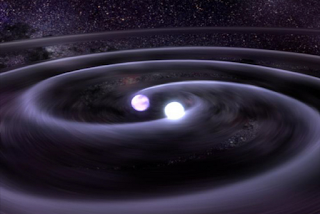 One of the most intriguing predictions of Einstein's theory of relativity is that, just like there are light waves and sound waves, there should also be GRAVITY WAVES. When the arrangements of massive objects in the universe changes (like two stars orbiting each other), Einstein's theory predicts that waves of gravity energy should be be given off.


But gravity waves are very, very weak and hard to detect. We have gravity wave telescopes operating, but so far they have not succeeded in catching some big gravity change that would give off enough waves to be measurable. So astronomers are turning the idea around. If we could find two massive stars in the universe that are in orbit, they should be giving off these subtle gravity waves and should be losing energy. That means the two stars will -- as their motion energy is lost -- spiral inward toward each other, something they would not normally do. The more compressed the star, the bigger the effect. Dead stars, that have fallen inward -- gotten "squozen" in death (as I like to say) are excellent subjects for testing this prediction.

Two astronomers in the mid-1970's, including one of my undergraduate advisors, Dr. Joseph Taylor, discovered two star corpses (collapsed stars) that showed exactly this kind of behavior. There were the two dead stars, called neutron stars, minding their own business in space, lost in each other's gravity embrace. Yet, they were very slowly approaching each other in orbit. And the energy they lost was exactly what Einstein predicted. Taylor and Russell Hulse won the 1993 Nobel Prize in physics for their painstaking observations of this pair. But their measurements were done with radio waves, since that was the only way to see these particular star corpses.


(For those of you who know a little astronomy, the precise story is that most neutron stars are only observable as "pulsars" -- objects that give off regularly pulsing radio waves.  As the two pulsars orbit, they lose energy and their pulses change as they get closer to each other.)

Now, a larger team of astronomers has just announced finding a different pair of dead stars (called white dwarfs) that show the same spiraling behavior, but shining in visible light. The nameless pair of star corpses is about 3,000 lightyears away. As they orbit close around each other (taking only 13 minutes for an orbit!), we see one eclipse the other. Between April 2011 and today, the eclipses have come 6 seconds earlier, as the two dead stars lose energy and approach. This is, again, exactly what we would expect if Einstein is right, and the pair is losing energy via gravity waves.

(Just as a lightbulb loses energy as it shines away light, and you have to pay the electric company to replace it, so it seems orbiting stars slowly lose energy as gravity waves. The difference is that there is no source of new energy, and so the stars simply fall slowly toward each other.)

How nice that Einstein's ideas, now almost 100 years old, are being confirmed in some of the strangest astronomical environments we can find. He'd be proud.

Posted by Andrew Fraknoi at 7:22 PM