An Interesting New Picture from Mars 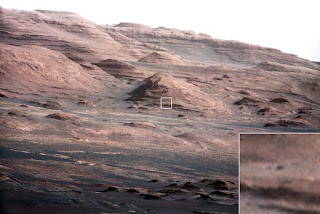 Curiosity (the new Mars Rover) has been driving around a bit, testing all its instruments. Here is my favorite new image, showing some of the interesting geological (or should that be marsolog

ical?) features we encounter as we look toward Mount Sharp, the rover's target.

In this picture, taken by the camera on Curiosity's big mast, we are looking toward the base of Mt. Sharp. You can see the many layers in the rock that were probably the result of standing water in the great basin (crater) that Mt. Sharp is in the middle of. The little inset shows a dark rock that is about the same size as our rover. So the pyramid-shaped mound behind it is much bigger than our vehicle. Exploration in this region will take much skillful maneuvering when it starts.

Bear in mind that Mars today has no liquid water to speak of, so that the scenes we will see will remind us of the deserts of the Earth.  But we have excellent evidence that ancient Mars, which had a thick atmosphere, had liquid water galore -- rivers, lakes, maybe even oceans.
Posted by Andrew Fraknoi at 10:31 PM