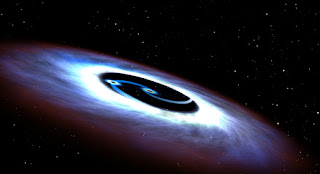 Using the Hubble Space Telescope, a team of astronomers has found that a superbright (active) galaxy is powered at its core by two supermassive black holes whirling around each other in only a bit more than one year. This remarkable galaxy is called Markarian 231, after the Armenian astronomer who made a catalog of such active galaxies (with unusually bright centers.)
The galaxy is almost 600 million lightyears away, so we cannot see the tiny area in the center which contains the black holes directly. But a detailed study of the ultraviolet light from the core of the galaxy strongly implies that a black hole containing enough material to make 4 million Suns is whirling around a much larger black hole (with mass inside for 150 million Suns.)
Think about those numbers! You would not want to live near such overweight black holes, but luckily they are confined to the central regions of galaxies (including our own Milky Way) and are not a feature of the galactic outskirts where our solar system resides in comparative peace.
The idea that enormous black holes like this can share the same environment is not news to astronomers, but it's nice to have such a clear example. We now know that the giant islands of stars called galaxies probably all started much smaller and have been growing through "mergers" (if you'll pardon our appropriating a word from the world of business.)
Smaller galaxies are "eaten" by larger ones, or two galaxies of equal size are attracted together by their mutual gravity. If the smaller galaxies each contain a big black hole, both black holes will wind up near the center of the merged object. If the original galaxies had orbiting motion around each other, their inner black holes will have some of that motion, and can circle each other until -- later -- their gravity also pulls them together.
The fact that the two black holes in Markarian 231 take only about one year to go around means they will collide in a few hundred thousand years (a long time compared to the presidential nomination season, but short for galaxies.)
When two black holes collide you get -- surprise, surprise -- a bigger black hole. But we have caught Markarian 231 in the act of a small galaxy having been swallowed, but before the two black holes had time to merge. There are stars and huge clouds of gas and dust being pulled in by the pair of black holes and as they are torn apart and whirled around, they give off a lot of energy.
It's that energy of doomed material (before it falls into one or the other black hole) that makes Markarian 231's center so unusually bright.
The method used to find the waltzing, whirling black holes in this galaxy holds promise for finding other pairs of giant black holes in other distant galaxies. And the existence of such pairs of hungry black holes is good evidence that our merger theory of how galaxies "bulk up" is correct.

(By the way, our image, above, is a painting, based on the Hubble data.  As we said, we can't take a picture of the inner part of the galaxy.  But below is a Hubble image of the entire disturbed galaxy with its bright center.) 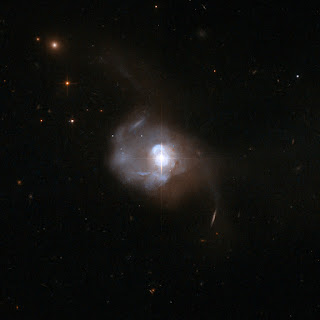 Posted by Andrew Fraknoi at 7:24 PM