A Sparkling Cluster of Stars from the Hubble 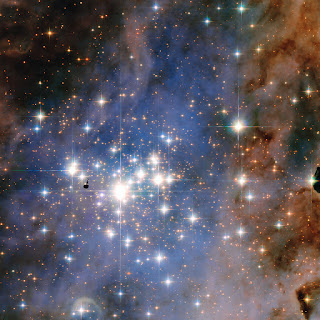 Here is a beautiful new image from the Hubble Space Telescope, showing a young cluster of stars called Trumpler 14.
Located about 8,000 light years away in the constellation of Carina, this grouping of hot bright stars formed only recently from a great cloud of cosmic raw material, called the Carina Nebula. It is one of the great ideas that we now know about how stars live that the more massive a star, the brighter it shines, and the shorter its life-span will be before it "burns out." Superstars die first, is the general rule.


Because Trumpler 14 formed only about 500,000 years ago (which is a very short time on the cosmic scale), this group still includes a lot of bright superstars, which dominate our image.
Robert Trumpler (1886-1956) was a Berkeley astronomer, who compiled a very useful list of star clusters (places where dozens to thousands of stars are born together.) An annual award at the Astronomical Society of the Pacific, honoring the best PhD thesis in astronomy in North America, is named in his honor.
In our picture, you can see a jewel-like display of bright stars in front of the glowing gas and dust of the nebula. The stars in this cluster are one ten thousandth the age of our Sun. Mere babies, really!

Click on the photo to enlarge it and see it even better.
Posted by Andrew Fraknoi at 9:42 PM