Ringshine on the Night Side of Saturn 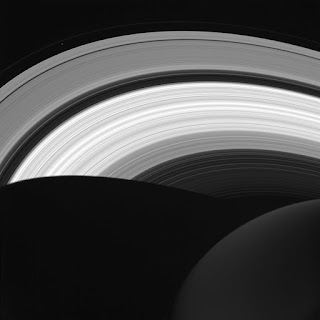 A spectacular new image of the night side of Saturn and its shining rings in sunlight was released recently by the Cassini mission. You can also see the shadow Saturn casts on its rings.
This August 2016 view shows the complex structure of the planet's rings clearly. You can see the two gaps in the rings, one wider and one narrower (in the outer part of the outer ring.) Close-ups have revealed fainter rings and moons in the gaps, so they are not really as empty as they might seem.
The sunlight reflected from the rings keeps the night side of Saturn from being as dark as it could be, much as moonshine keeps the nights on Earth from being completely dark. One scientist calculated that if you could float in the upper cloud layers of Saturn (which has no solid surface), you could read an astronomy book by ringshine.
Look at the complexity of Saturn's rings -- ringlet after ringlet can be seen in each main ring. And each ringlet consists of millions of icy chunks, all orbiting together around the equator of Saturn. The main composition of these icy chunks is water -- making the rings a significant reservoir of water for future explorers. (Although two of Saturn's moons, Enceladus and Dione, are now thought to have liquid oceans of water under their icy crusts. Perhaps we can siphon some of that instead of melting ring chunks.)
The image was taken from a distance of 870,000 miles (which seems far, but Saturn was about 850 million miles from Earth at that time, so Cassini definitely had the better view.)
Posted by Andrew Fraknoi at 3:38 PM