Water Worlds in the Solar System 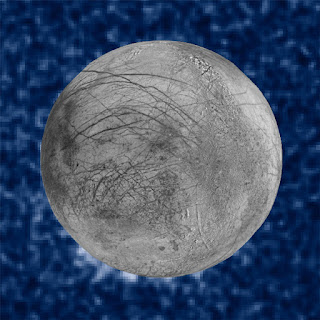 There is new evidence for the existence of liquid water in the cold outer regions of our solar system. Astronomers using the Hubble Telescope see plumes of water erupting from the surface of Jupiter’s moon Europa, and measurements of Saturn’s little moon Dione indicate that it must have a substantial layer of liquid water deep underground.

In recent years, more and more evidence has accumulated that liquid water exists among the moons of the giant planets. We have known for a while that there is likely to be an underground ocean of water beneath the icy crust of Jupiter’s moon Europa, and perhaps also under the surface of its moon Ganymede (the largest moon in the solar system.)
Then the Cassini mission found great geysers of salt water emerging from the icy cracks on Saturn’s moon Enceladus, a world much smaller than the Jupiter moons we just discussed. The big deal here is not that there is water, since water ice makes up a large part of many of the solid worlds in the outer solar system. The big discovery is that, even in those icy realms, enough heat can be generated inside these moons to have oceans of liquid water.


The Hubble work is the second report of plumes coming out of cracks in the ice of Europa. Earlier work, also done with the Hubble, also hinted at such plumes, but now astronomers have observed them in ultraviolet light as Europa was crossing the face of Jupiter. Our top image shows you what was observed, with a visible-light picture of Europa photoshopped in to show you what the moon looks like. A short NASA movie explaining the discovery can be seen at:
https://www.youtube.com/watch?v=4QJS9LcB66g
The work on Dione was more indirect. This moon of Saturn’s is about 700 mi across, more than twice as big as Enceladus. The presence of water was suggested by measurement of the gravity of Dione, as the Cassini spacecraft flew by it. The gravity measurements fit with the presence of a water layer deep inside the moon, perhaps 60 mi beneath the surface.
(The bottom image shows a very detailed image of Dione's surface from the Cassini spacecraft.  You see many icy cracks and fractures, whose sides show as white cliffs.)
Something must heat the buried “oceans” in these moons to keep them liquid. In some cases, it is a tug of war between the gravity of the mother planet on one side, and a large moon on the other. Or it may be some kind of rocking back and forth, which scientists call “libration”. Whatever allows liquid water layers to exist out there, the fact that they do makes them an interesting place to look for the beginnings of life. 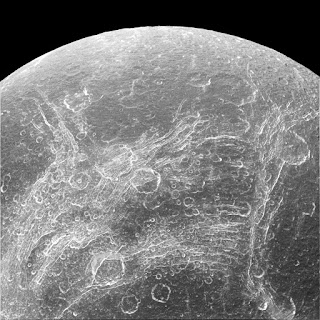 Posted by Andrew Fraknoi at 7:47 PM